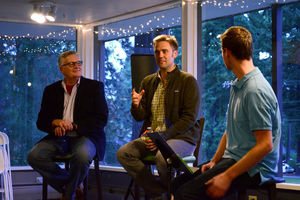 Administration and students gather to discuss a unified NU 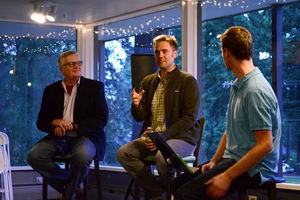 More than 30 students gathered in Perks lounge for a night of discussion with Dean of Student Development Rick Engstrom and Provost Dr. Jim Heugel at Northwest University’s first Town Hall meeting on September 16th. “As administrators, we recognized that we haven’t been interacting with students enough and we now have the opportunity to improve that,” said Heugel.

The meeting, organized and mediated by NUSG President Mark Olsen, covered a diverse range of student-submitted topics. Olsen, Engstrom, and Heugel opened the conversation by stressing the necessity of improved, healthy communication between students and their administrators. “In order to be a unified campus focusing on what really matters, we need to dig deep together, weed out the issues, and plant seeds of restoration,” said Olsen.

Topics of discussion included residence hall visitation policies, renovations needed in the Guy, Perks, and Crowder dorms, new developments in Butterfield chapel, consistent financial transparency, and the process of student appeals. Deviating from the conventional structure of panel speakers among an audience, Engstrom and Heugel also took time to ask students for their perspectives on important campus issues.

“It was a very unifying conversation,” said Lemuel Daher, a junior and debater at NU. “Sometimes it can seem like an ‘us versus them’ approach when engaging our administration with concerns, but tonight felt more like [us], students and administrators together, versus the problem.” As the meeting came to a close, Engstrom and Heugel spoke about NU’s future efforts to ensure that platforms like Town Hall meetings become a regular aspect of student life.

In a recent letter to students from office of President Dr. Joseph Castleberry, multiple outlets for students to voice their concerns, including Town Hall meetings, were announced. This year, students can expect future forums with the President, increased surveys and focus groups, and the launch of NU Suggestions – a website created to connect student ideas of improvement with administrators who review suggestions and assign them to project leaders.