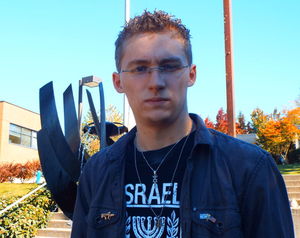 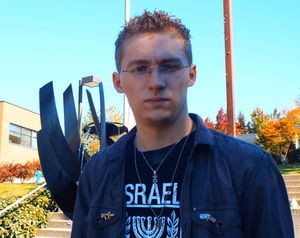 In the Middle East, where allegiances are constantly shifting, Israel has stood fighting for its rights as an independent nation since its foundation. Though in near constant warfare since its declaration of independence on March 14, 1948, Israel has allies all over the world. One of those allies is right here on Northwest University’s campus.

Kyle Flannery is a born and raised United States citizen, though his appearance doesn’t fit stereotypes. Adorned head-to-toe in Israel paraphernalia, Flannery is the head of the Eagles for Israel club, a group that seeks to advocate the country and its people through activism and events at NU.

Flannery has been to Israel four times, and his heart has been drawn towards the country since his first visit with his grandparents. When asked about the heart behind Eagles for Israel, he replied with a deliberate mission statement: “To stand with support and defend the Jewish people and the State of Israel.”

Although Flannery claims to have a passion for ministering to the Jewish people, he affirms that his personal calling is less about evangelizing and more about informing people of what is happening in the country. “I’m not an evangelist. I like to get the facts, that’s what I stay here to do; so people get the facts of the conflict…to make up their own moral opinions on the Israeli-Palestinian conflict.”

The Eagles for Israel club closely mirrors Flannery’s ambition, as their objective is to provide an accurate representation of the people of these countries. It can be difficult to keep people engaged and empathetic towards the plight of two nations when such conflict arises halfway across the world. The club strives to bridge this gap by putting a face to the conflict, showing that the people on both ends of the struggle are human beings to be loved. Even though the club is pro-Israel, they are first and foremost pro-human.

Neither Israel nor Palestine is a perfect country, and Flannery takes time to address his love for the Palestinian people as well. “From a Christian perspective, it’s important for us to be a mouthpiece of humanity, moral superiority, love, and truth. We have to go beyond the hatred and bigotry that the world wants us to put on one of these countries. This has to break our hearts.”

Flannery said that it’s going to take a lot more than us to bring peace to these people. “We all want peace, but in the end, the very Prince of Peace is the only one who can bring true peace to the world, and that’s the Messiah.” This is Flannery’s final year at NU, but he will continue to serve Israel and its people for years to come.

Administration and students gather to discuss a unified NU