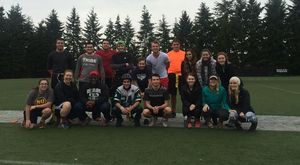 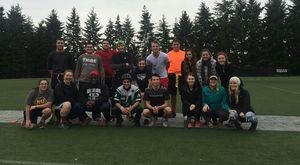 Weather conditions, lack of players, injuries, homework, desire to sleep in – none of these setbacks can prevent Intramural Football from happening at Northwest University. Saturday mornings during fall semester have become a great time for nursing majors, musicians, future pastors and students from all fields of study to gather and play competitive games of flag football.

The championship consists of seven teams, six of them representing each floor in the residence halls and one formed by students who live off campus. Only the top four make it to playoffs, and the standings are based off win/loss records. If teams end up tied with the same amount of points, goal difference becomes the tiebreaker.

Some rules are set to guarantee the safety of the players, for instance, no tackling or jumping on fumbles are allowed. However, it is not uncommon to see some stitches, concussions and ripped clothes as consequences of the games.

“Sometimes it promotes friendly competition between floors, sometimes not so friendly, but this is kind of the nature of the game,” said Nick Greenlee, a Tribe’s player that had to sit out for several weeks due to a concussion he got during one of the games.

Despite the competitiveness and the physical nature of the game that casually causes some heated responses, Intramural Football generally promotes a positive environment for players and fans to enjoy.

“It’s a fun way for me to connect with the floor, and I think it is a good opportunity for the guys to get active and enjoy community bonding time,” said Heidi Edgecomb, a sophomore nursing major who comes out to support her brother floor, the Tribe.

“Intramural Football adds a new spirit to our school, especially since we don’t have a football team. Some guys are athletic but they are not as athletic for a sports team, or they don’t do it because they don’t have the time, so this is a chance for them to do something that is low commitment and still really fun,” said Edgecomb.

But women don’t only participate on the sidelines cheering the guys on. Mariah Savage, our very own Eagle Spirit Director, courageously put herself out there to play flag football alongside the men.

“I still have no idea what I’m doing and I’m pretty sure I pull a muscle every game, but hey YOLO, we are having fun,” said Savage.

The Intramurals Director, Josh Pineda, plans to organize more opportunities for women in the future. According to Pineda, there will be two months of basketball, two months of soccer, and in the last month of school there will be volleyball and dodge ball tournaments, which gives the ladies more ways to participate in the games. Pineda aims to improve and expand Intramurals in many aspects, by keeping stats, creating a prize for the winning teams, organizing all-star games, having a photographer and even posting highlights of the matches on Snapchat.

“I want to take a bigger step every year, so that it builds up and becomes a thing. And hopefully by the time I graduate someone can take it up and continue to make it grow into a bigger deal,” said Pineda.

The playoffs start next week on Saturday November 14th. The team standings and playoff announcements are going to be posted on the Intramural Football Facebook page, created by Pineda to communicate with players, fans and anyone who is interested in the championship. You can access it through the following link: https://www.facebook.com/NUintramuralsports/?fref=ts

Wellness Center Partners with Nutritionist to Fight the Freshmen 15