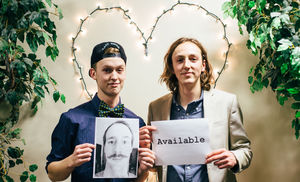 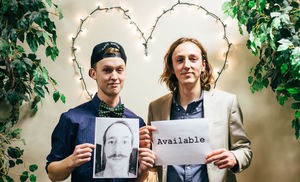 Held in Gray-Beatty, the entire night was emceed by the hilarious Tristan Norris. As part of the night’s entertainment, NU’s Professor Bryan read the lyrics of modern pop songs about “love” in an English accent; Andrew Aguilar tackled Adele’s hit “Hello” on guitar, Christian Dawson belted out Justin Bieber’s “Love Yourself” accompanied by guitarist Jonathan Stariha and Pastor Dean Curry from Life Center Church shared his “10 nuggets of dating wisdom.”

Although the event was meant to be a fun, light-hearted night, there were serious intentions behind it. Robertson said, “We just really want to break the Northwest standards of dating. It doesn’t have to be awkward!” Alvarado added, “[It’s] a satirical attempt to change Northwest culture.”

Among the 120 participants, one was not an actual student at NU. Braden Barnard, a student at Western Washington University, was staying with his Northwest friend Ethan Lockhart for the weekend and decided he too wanted to give NU Speed Dating a shot. “Everyone here is so nice. It could have been really awkward because I don’t know anyone here, but it was so much fun! I love how open people were, and how willing everyone is to make new friends,” said Barnard. Alvarado and Robertson have decided that they would like to try to make NU Speed Dating an annual event. For all of you who were unable to attend the event, or for those who would like another shot at finding “the one,” there’s always next year!