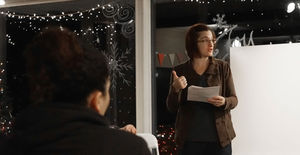 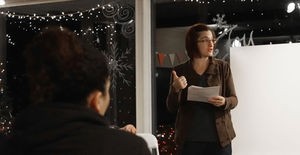 Each year, Northwest University’s housing department receives hundreds of applications from eager students hoping to secure a spot in the campus apartments. With about 1,500 traditional undergrads and only 28 available apartments, the selection process can be highly competitive. At last Thursday’s Town Hall meeting held in Perks lounge, students and administrators gathered to discuss the process. “Tell me what I’m not seeing and let’s put this thing together so we can make a fair process. Your voice matters,” said the director of Residence Life and Student Housing, Sarah Jobson.

The application requirements for next year are simple. Any undergraduate student, age 20-25 is eligible to apply. Applicants must be registered for the following academic semester. Late applications will be disqualified. A notable difference from last year is that the numbered-order in which people turn in their applications will no longer matter. The selection process is where things get complex. Three possible options for a new apartment selection method were presented, with plans to implement the most suitable option as next year’s process. There are 28 total apartments, 22 four-person slots and 6 six-person slots. The options presented by Jobson are as follows:

Option A is a lottery system where apartment slots are drawn at random. Tickets for drawing are given to students based on class standing: four ticket draws for seniors, three for juniors, two for sophomores, and one for freshmen. Class standing at NU is based on total credits earned: 0-29.9 credits, freshman; 30-59.9 credits, sophomore; 60–89.9, junior; and 90+ credits, senior. Total tickets are tallied per applicant group.

Option B selects students by tallying the average credits earned in an applicant group. This includes any credits earned by transfer or Running Start students. The apartments with the highest averages get priority placement. This is similar to Option A, but does not include the lottery ticket system.

Option C requires the apartment representatives (ARs) to hand-select their residents from the applicant pool. Though least complex, this process was most contested by the students present at Town Hall. “Oh, the power!” a student said.

A soft poll of the room found most students in favor of Option A. Although the randomization element still prioritizes seniority by giving those applicants a higher probability draw, there still remains a chance for other non-upperclassmen students to be selected. Director of Student Development, Rick Engstrom, questioned the accountability of a lottery system. “Is there a way for students to peek behind the curtain and see the randomization process or will we get to see the official tally for credits earned by all students in Option B?” asked Engstrom. Jobson suggested a possible solution would be publicizing the lottery ticket draw so that students themselves pick apartment slots in groups. The randomization data could be made available to applicants after the selection process.

Many students questioned the possibility of accommodations for applicants with academic requirements or food allergies that conflict with the Caf meal plan, mandatory for those in the residence halls. Part of the campus apartment appeal is schedule flexibility and personalized cooking, all for a cheaper semester rate. “How do you prioritize a senior nursing major or an El. Ed [elementary education] student-teacher who simply can’t afford to live in the residence halls?” asked one student. Another person in the crowd suggested that the selection process should give apartment returners extra lottery tickets for Option A or higher credit averages for Option B.

This notion was countered by Eric Gallup, Area Coordinator for Extended Community. “What are the negative aspects of giving extra points for older students or returners?” asked Gallup. He and Jobson explained that the apartments, in order to remain accessible to all students, must not become a homogenous community oversaturated with students who are eligible to live off campus.

The desire for a selection process that still addresses specific circumstances became a recurring theme in student feedback. “It’s tricky getting the right formula for ensuring this process is fair,” said Jobson. In the previous years at NU, selections were based on a meticulous point system that rewarded student performance. Points were tallied under a myriad of categories, including cumulative GPA, class standing, student leadership status, chapel attendance, a clear account balance, and parking ticket records. Applicant groups with the highest total scores secured a spot. Jobson noted that this point system was ultimately too divisive of the student body by prioritizing an elite few. In addition, the validation process was extremely time consuming and hardly provided all students with equal access to the apartments.

So where are we headed now? While the official decision has not been made, students can look forward to a more equalized selection process that is meant to work in conjunction with the new progressive housing model. Next year, the goal is to create a housing environment that can better accommodate older, returner students who may not get into the apartments. Announced by Jobson earlier this semester, the Guy, Perks, and Crowder residence halls will strictly be for new, incoming freshmen and the Gray-Beatty residence halls will be for returning students.