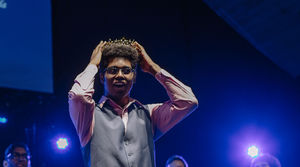 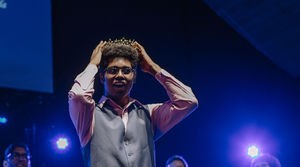 Seven young competitors waited in the chapel to participate in the first annual Mr. Northwest Contest on Friday, March 18th. Students filled the seats of the dimly lit building, laughing and talking in anticipation of what would be a night of comedy, excitement, and competition. The night was hosted by Northwest University students Andrew Robertson and Samson Alvarado. The participants were Matthias Ramirez of the Hood, Dominick Downer of the Zoo, Owen Bostrom of the Wolfpack, Joey Segalla of the Hive, Lemuel Daher of the Ducks and Chicks, Josh Deshazer of the Tribe, and Isaac Lund of FOA.

Seated in the front were the three judges, Dr. Joshua Ziefle, an associate professor of Youth Ministry, Dr. Jeremiah Webster, a professor of English, and Pastor Rasmussen, the campus pastor. The judges delved into the spirit of fun and excitement. Rasmussen said, “I’m here to have a good time.” NU’s male version of a beauty pageant was a hit. Megan Knott, a resident of Guy 200, said, “I laughed so hard I cried!”

Lemuel Daher was the night’s victor much to his delight and shock. A few days after the event, he said, “I’ve actually been in the same stunned state of disbelief since Friday.” Daher attributes his success to his ability to be funny. He said that he was elected because of his reputation as a jokester. He also gives credit to the other residents on his floor, “They nominated me because they thought I would make the judges laugh, that I would make people laugh… it’s because of the network I had around me that I actually had the confidence to take the stage.”

The contest was judged through multiple categories, including the catwalk, talent, and group interview. The night also featured group dances and a short video documenting the rehearsals. The catwalk portion had the seven young men dressing up in different outfits in order to “strut their stuff in front of the judges and allow them to establish their conservative appearance and true poise” as Wagner stated. Deshazer showed off his Jedi skills, Lund dressed as Moses and danced to music from the Prince of Egypt, and Sagalla demonstrated his inner kindergartner on his first day of school.

During the talent portion, Ramirez showed off his song writing ability by depicting what an eagle would sound like, Bostrom demonstrated his skill of identifying flowers by their smell, Daher did a stand-up comedy routine, and Downer preformed a lip syncing and dancing act. Each of the acts drew laughter and cheers from the amused spectators.

During the group interview, the contestants sat in a panel and took turns asking each other questions. The questions ranged from all sorts of different categories. Downer revealed that he would invest his lottery winnings in betting it all again in the lottery, “and then give the money that I would win again to the kingdom.” Bostrom said that he sees himself married to Taylor Swift in ten years. The three drinks that Lund said he would choose to have come out of a cow he theoretically would own were water, a cold brew and horchata.

The evening wrapped up with Daher being announced as the winner and an eruption of picture taking and excited discussions about the evening. His crown and sash are hanging in his room today.