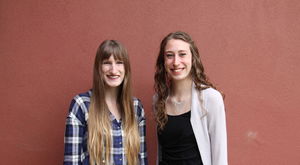 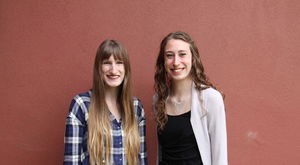 Samantha Price – known to the students as Sami – and Samantha Quigley will be taking over the president and vice president roles respectively in the Northwest University Student Government. Both women have held leadership positions in the school before and said they are excited for the challenges this next year will present them. Already, they are busy interviewing candidates for other positions and learning as much as they can about the roles they will be stepping into.

One of Price’s many responsibilities as president will be representing students in the presidential cabinet. Price said one her key desires is to improve communication between the student government and the students. She said she is excited, “to advocate for the student body straight to administration.” Price has visions for an improved presence on campus and hopes to provide more availability to the students.

Price’s first leadership role at NU was as the RA of Guy 200 her sophomore year. Price said she enjoyed the position thoroughly and learned a lot from it. “We have to power to build each other up, and I absolutely saw that in leadership as an RA,” said Price.

Originally, Price had planned to be an RA again, but when she did not receive the position she was encouraged to run for president. Though Price said had never considered this before, she jumped at the opportunity. Now she is ready to take up a new role in the school.  She said, “I’m excited for the challenge and I’m really honored that Jesus trusts me with it… you better believe I have the guts and I have the energy to tackle it and make it happen.”

As vice president, Quigley will be working with the senators and communicating with administration. She said her personal goal is to increase “communication and clarity between students and administration.” She also hopes to assist NU students in voicing any of their concerns to the school’s leadership.

Quigley has held a leadership position every year she has been at NU. During her freshman year, she was on the student activities board as well as co-leading a life group. This year, she is holding the senator position for Guy Hall. She found that she enjoyed participating in senate and said this led her to run for the role of vice president. Quigley said, “It’s something that I’m so passionate about that it just made sense to want to take it to the next step and continue it.”