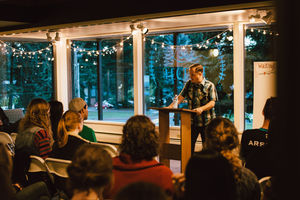 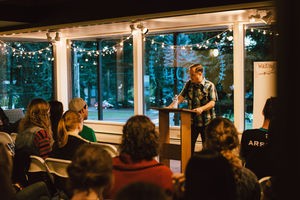 “Last Lecture” is an ongoing series at Northwest University. The event provides professors with the chance to speak about the topic they would choose if they could give only one more lecture. After working in the English Department at NU for a little over a year, Dr. Clint Bryan was invited to speak at this month’s “Last Lecture” event.

“I am thrilled…and humbled by this opportunity,” Bryan said of his nomination. His talk, which centered around the work people do for God when no one sees, was aptly entitled “Waiting in the Wings.”

Bryan opened his lecture by describing the draw of “limelight addiction” for those involved in ministry. He defined “limelight addiction” as the desire to constantly be recognized for one’s personal achievements. Bryan also spoke of how he struggled with this issue when he was 24 and working as a youth pastor. When the senior pastor at his church quit, Bryan was forced to add 60 hours a week of ministry to take the senior pastor’s place. He detailed the disillusionment he felt during this time, as it seemed like no one noticed his efforts. At a prayer time during this period of his life, Bryan received a revelation from God and said, “If Your will calls me to obscurity, I will serve you there.”

Bryan’s message boiled down to what he called “the cover-up conundrum.”  Simply put, “the cover-up conundrum” is the idea that what we want to hide in our lives is what God desires to expose. Similarly, what we want to be recognized for is what God wants us to do in secret. Bryan also asked for input from the audience. When asked what they would like to conceal, students gave answers such as “brokenness,” “depression,” and “sin.” When asked to list what they would like to be known for, students replied with “service,” “mission experiences,” and “talents.”

While on the topic of concealment, Bryan emphasized the importance of being open with others about one’s struggles. He also made his avid support for counseling known. “Seeing a therapist at times when life felt overwhelming has helped me immensely…There should be no stigma, whatsoever, for Christians who go to counseling,” said Bryan. This statement was met with hearty “Amens” from the audience.

“It’s in our weakness that Christ is made strong, so we shouldn’t hide our brokenness,” Bryan said. He also spurred students to be active in their dedication to God, asking, “In what specific ways do you need to go public with your identification with Christ?”

“Metaphorically, a resurrection is the work God performs in us. We cannot take pride in it,” Bryan said.

Bryan cited Matthew 6:6, when Jesus urged other believers to pray in secret. A recurring theme throughout Bryan’s presentation was the importance of serving God when no one else is watching. He succinctly summarized this message at the end of the night.

“How we respond to the limelight moments of life is directly related to how faithfully we’ve rehearsed in backstage obscurity when we perform for an audience of one – our Heavenly Father alone,” said Bryan.

Bryan’s message was ultimately one of humility and sacrifice. His passion for Christ and enthusiasm for discipling students were evident throughout the lecture. Students walked away feeling inspired, related to, and built up in the Word.

The next “Last Lecture” is scheduled for October 27. The speaker is yet to be determined.

Tackling the New Academic Year: Words of Advice from Around Campus