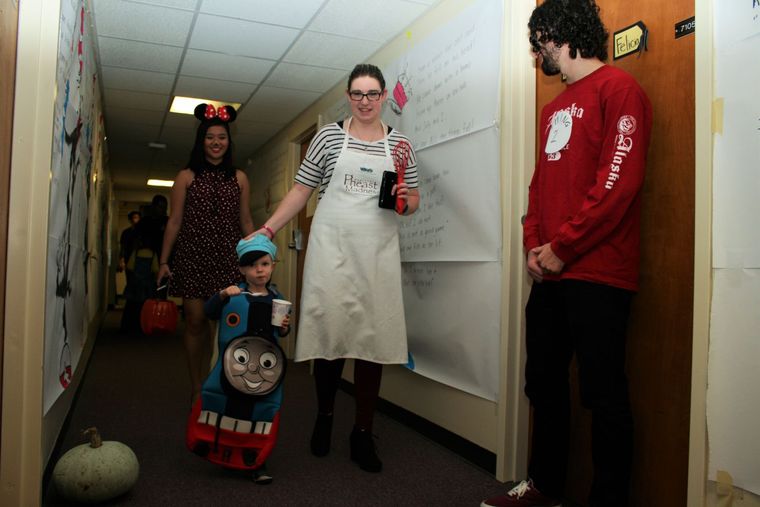 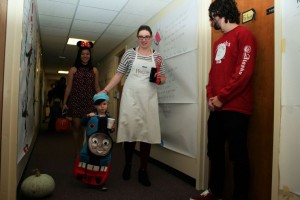 NU’s first annual Halls-o-ween event was a huge success. The apartments and dorms collaborated to turn their buildings and floors into seven different storybook themes.

The Hive wove childhood poetry with The Cat in the Hat. Ducks and Chicks took the families through the Land of Oz. The Pride brought the fun shown in The Lorax. The Brother/Sisterhood had a whimsical display of Alice in Wonderland, and the Zoo did a spectacular job with The Jungle Book. Appropriately, the Wolfpack tackled The Three Little Pigs. And finally, The Flanimals told the classic story of Goldilocks and the Three Bears.

Andrew Black, a junior at NU, expressed that his favorite part was, “how everyone came together on my floor with enthusiasm about Halls-o-ween.”

The creativity behind each decoration and strategically laid out item made each floor unique from their neighboring floor. Because the apartments are separated from the dorms, the Flanimals were given the opportunity to transform the dungeon of Gray-Beatty into a charming cabin for Goldilocks. The floor decorations weren’t just for the NU community; it was for the community of Kirkland to come and enjoy.

NU marketed their Halls-o-ween community event by hanging posters in local coffee shops. The floors were allowed to decorate on Sunday (10/30) and Monday (10/31). The students were scrambling to cover their walls and doors with theme-related decorations, and hung curtains and drapes from the ceilings. Soon, many families from the surrounding community showed up with little ones dressed as doctors or lions or princesses, eager to experience what each floor could offer. They began their adventure in Perks Lounge and wound through each of the floors, beginning with the Zoo.

Many NU students joined in on the fun by dressing up to match their theme and made the experience even more memorable by becoming live characters and handing out candy to the young visitors.

Hannah Yelas, a junior at NU and RA of Guy 300, was a greeter for her floor and directed people as they came in. Yelas said her favorite part of Halls-o-ween was, “seeing the little kids’ reactions to the floor’s decorations.”

While the final product was impressive from all floors, the work behind the scenes was the most rewarding for many NU students.

RA of the Wolfpack, Lyndsay Crawford, enjoyed the behind-the-scenes work of decorating the floor.

“The process was really fun!” she said. “We were a little nervous getting it done in time but people from Wolfpack came and helped a lot, which made it less stressful and really fun.”

Regardless of the seemingly flawless night, there was a small snafu. Around 6:30 p.m., just thirty minutes after the floors opened their doors to the community, the fire alarm in GPC began to screech. The sensors had been triggered by a fog machine. Though everyone had to evacuate the building, the mood was not dampened and soon everyone was able to return to their decorated floors. Some people decided to take the opportune moment to check out the floors in Gray-Beatty.

Seattle Ecommerce Conference: A Weekend of Collaboration for Entrepreneurs