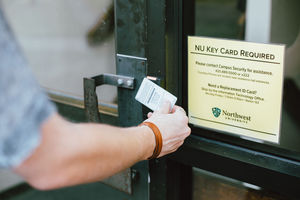 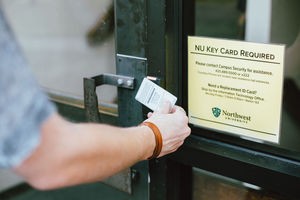 2016 has brought about many significant changes to the Northwest University campus. While NU introduced new tennis and basketball courts, a redesigned cafeteria, and a completely revamped brand, one of the biggest changes effecting students this school year comes in the form of the university’s new student ID cards.

NU has finally taken the first steps to completely getting rid of combination locks. These new student ID cards not only function as a way to check in at chapel and pay for food in The Caf, but now they also function as electronic keys to various spots across GPC and Gray-Beatty residence halls.

Tristan Norris, the Area Coordinator of Gray-Beatty, had nothing but praise to sing about the new cards.

Norris went on to explain the difficulties of the doors being previously locked by code rather than card, citing safety as the top concern. He noted that with the door codes, “people who shouldn’t have access to our building” could gain access if they figured out the code. With the new key cards, that issue is now mostly eliminated.

Norris further praised the Information Technology department – especially programmer John Mabbott – for taking on this monumental task. “To get [this] off the ground was so much work for IT, specifically John,” he said respectfully.

Another advantage to the new key cards is access permissions can be changed by IT in just “a few clicks of the button,” Norris added.

This would be applicable, for example, if a student were departing from the residence halls or the university in general. While previously the building codes would need to be changed every time someone permanently departed from the halls, the new setup allows IT to simply remove permissions granted to a particular key card.

However, technology is never without its kinks. According to Taylor Murray, the Beatty Resident Advisor, students have been facing numerous issues in regards to their key cards.

“Some people have had issues with their card not working in the building that they don’t live in, or if they are off-campus, they can’t always get into a residential building,” Murray said. She went on to say that “sometimes their card just doesn’t let them in where it’s supposed to let them in.”

Murray added that most of the issues have been solved—but stressed that other problems have continued to arise from students who do not know what their card gives them access to.

Beside these issues, the new NU key cards seem to be working effectively, allowing students quick and easy access to their own floors, as well as neighbor floors during visitation hours.