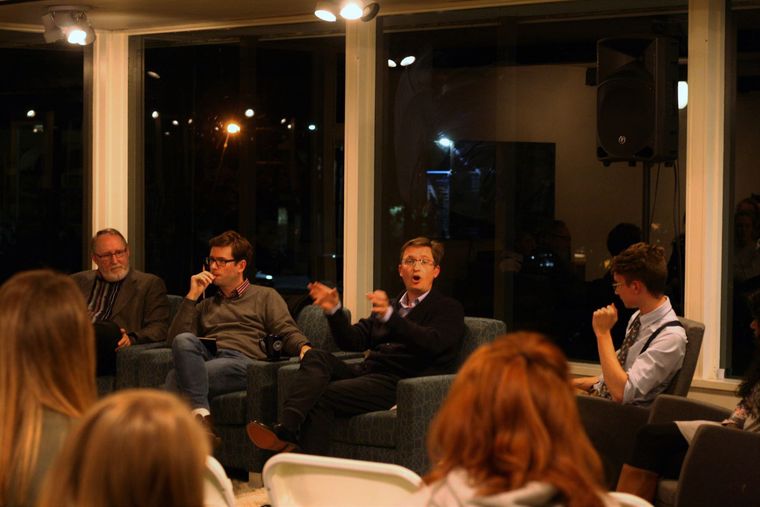 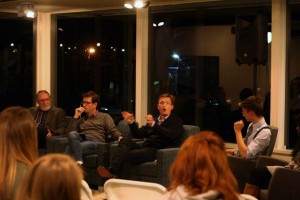 As the presidential election is fast approaching, politics and voting are on many people’s minds this month. On Tuesday, Oct. 18, staff and students addressed these subjects at a Politics Panel held in Perks Lounge. This panel was led by four NU professors, Amy Sjoquist, Dr. Joshua Ziefle, Jon Burt, and Simon Mould.

Students Aliya Shepard and Jonathan DeMacedo hosted the event and asked questions about topics such as professors’ viewpoints, the intersection of faith and politics, the current election, and how college students can be more involved in politics.

During the first segment, the panelists discussed their political viewpoints.

“The viewpoint that I represent is the importance of intelligent voting and being informed,” said Sjoquist, a professor of political science and philosophy.

Mould, a professor of international politics, emphasized the importance of critical thinking and seeking out the true facts as a crucial part of making informed political choices.

To be informed and think critically, the professors urged students to find and read both liberal and conservative news sources regularly, to read presidential debate transcripts, and to read the Washington state voter’s pamphlet. Voter’s pamphlets are available at the Kirkland Public Library. The New York Times, The Economist, and The Wall Street Journal were all suggested news sources as well.

Sjoquist warned the audience about the dangers of believing everything one hears because persuasive advertising tactics are often used in political radio and TV news.

“Start to become acclimatized to the nature of the discussion, so you can pinpoint lingo and the way people try and persuade you to believe one thing or the other,” said Sjoquist.

Mould suggested students get involved in politics by taking internships at political and social cause organizations while networking along the way. Burt let students know that they have free access to online news feeds such as The New York Times through the Northwest University Library website.

When asked about how Republicans and Democrats can work together in a bipartisan way, Burt pointed out that the end goals are the same for both parties, the only difference lies in the strategy.

“Try to find an articulate argument on how [Republicans and Democrats] intend to get there,” Burt said.

On Tuesday, November 8, the U.S. will vote for Democratic candidate, Hillary Clinton, or Republican candidate, Donald Trump. However, many people are dissatisfied with the candidate choices, and show their dissent by choosing not to vote. The panelists were asked what they thought of this common resolve.

Mould expressed his understanding of the reasoning behind many individuals’ choice to abstain from voting.

“Nevertheless, vote for the Senate. Vote for the House of Representatives. Vote for political issues. Either of [the presidential candidates] need to have in place a Congress that is going to check the power of the presidency, no matter if it’s Trump or Clinton,” said Mould.

Burt assured students that whoever wins the election, they can’t destroy everything in just four years.

“But, if you take the long term view, the one power a President does have that will long outlast their administration, is the Supreme Court,” said Burt.

Burt went on to describe the effects of the Supreme Court on the U.S. government.

“Whoever appoints the [Supreme Court Justices] controls the interpretation and understanding of the Constitution for the entire next generation,” said Burt.

Burt explained that the Justices will control the political leaning of the U.S. government, liberal or conservative, for the next 20 years.

The panelists addressed questions on how to integrate Christian faith into politics.

Ziefle spoke about his belief that faith and politics are inseparable.

“There’s not a choice of [faith] not being part of our political actions, including voting,” said Ziefle.

Sjoquist relayed her struggle to reconcile her Christian faith with her political viewpoints, both when she leaned Republican and when she leaned Democrat. Sjoquist went on to say that she eventually realized that it didn’t matter what side she was on.