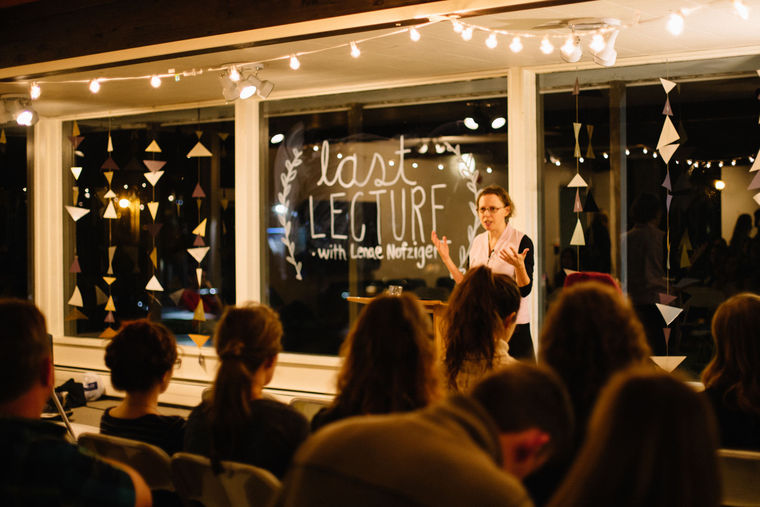 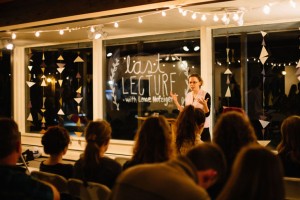 Last Thursday, NU students and faculty gathered in Perks Lounge for the next evening of “Last Lecture.” The “Last Lecture” series challenges professors and staff with the question—if they knew they had one last lecture to give to students and their loved ones, what would they say?

Professor Lenae Nofziger took the podium this time. As an English professor and published writer, Nofziger brings her passion for stories and poetry everywhere she goes, and her “Last Lecture” was no exception. Nofziger wove together her personal story, the life experience of Mother Teresa, and a Danish fairy tale titled “The Green Knight” to illustrate the overarching theme of her lecture: suffering.

Nofziger began with her own life, vulnerably sharing with the audience about a time of prolonged depression she had faced in her thirties, a season she called a ‘desert.’ Her husband, a social worker, was able to diagnose her condition and she sought physical and spiritual healing.

“When I was depressed I was still going through the motions of my life,” said Nofziger. “But it was like a cardboard Lenae was doing those things, and the real Lenae wasn’t there.”

Nofziger next shared a lesser known side to the life of Mother Teresa, who received a clear call to minister to the poor of Calcutta after encounters with Jesus. Once she obeyed that call in 1948, however, the presence of God inexplicably withdrew from her life, and she would spend almost fifty years in what she repeatedly called “darkness” and “spiritual dryness.” Yet until the end, she remained steadfast to her ministry and faith.

Nofziger was mystified by this fact, that someone with such a call would not have the tangible and comforting presence of God. In her ‘desert,’ Nofziger had also faced the struggle of still believing in the grace and joy behind life, but not feeling it.

Nofziger offered both stories as a challenge to “the sometimes too-tidy story that we can hear sometimes—that if we follow God’s call, all will be well for us.”

Yet this is not the case, Nofziger emphasized, and one should not assume they are not on God’s path when they encounter suffering.

“Spoiler alert: suffering happens to all of us,” Nofziger said. “It will happen to you, it will happen to me. That’s just how things are down here on Earth. But I also know that we aren’t alone in that desert experience.”

Because of what Christ went through, Nofziger said, He has compassion for humans. Through the example of Jesus’ suffering, the pervasive worldview is challenged and when someone suffers, it must be their fault. Yet again, Nofziger emphasized, difficulties and suffering do not mean humans have chosen the wrong path.

For the last half of her lecture, Nofziger shifted away from her podium and notes, and captivated the audience as she recounted the Danish fairy tale “The Green Knight.” Woven throughout the story about a princess and her father, a knight and talking animals, were morals around relationships and suffering.

At the tale’s end, Nofziger facilitated group discussion and highlighted that the heroine’s sorrow was remedied through her own courage, and the love and care from those around her—lessons everyone can apply to their own sufferings.

“As Christians,” Nofziger said, “we can be assured of our own ‘eventual’ happy ending that Christ has already won for us.”

Not to say that everyone won’t face tragic sufferings, she affirmed, “but it does mean the suffering is not the end of the story.”

Those words concluded a considerably lighthearted night on suffering, leaving the students reflecting on the stories and their wise morals.