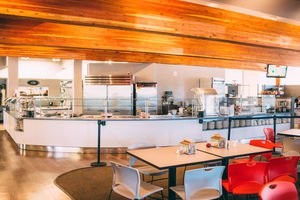 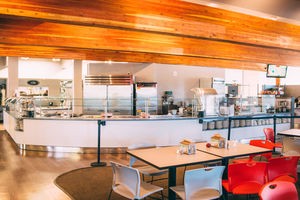 Editor’s Note: As of October 5, it was announced that Pioneer College Caterers Food Services Director, John Gaffud recently submitted his resignation to Pioneer. The Talon will cover these management changes in a future article.

The Northwest University cafeteria has been subject to an extensive renovation which was unveiled in time for the start of fall semester. The changes were long overdue and involved a comprehensive remodel from physical décor, food variety, team structure and healthier food choices. Taking advantage of a quiet campus during the summer, NU removed some old features of the cafeteria and fashioned a more modern ambience with brighter paint tones and a rustic wood ceiling. The outside was also given a facelift with more fun and vibrant colors.

Previously, the Caf had fewer stations, fewer options, and fewer crew. There was as sense of disorganization, small staff and limited food variety which needed to be addressed.

Chef Adam Lanning affirmed physical renovations were needed. Lanning who has worked in the Caf for the past eight years pointed out that the Caf wasn’t so inviting.

“The interior was plain,” said Lanning.

Manager Shelli Chan agreed that the cafeteria has been the same for the past 50 years and was in need of some modern touches. In her words, things were getting too “stagnant.”

In the newly modernized Caf, Lanning is content with the fact that the food stations are more distinct with the more clearly organized options for students.

Chelsea Skinner, sophomore, pointed out that last year the main stations were the Deli Bar, Burritos/Nachos Bar, and Omelet Bar. Those options have now been replaced with stations such as the Wrap Station, the Grill, and the Rotisserie. The Pizza Station is especially popular among students on Thursdays and Fridays, when it features signature pizzas crafted by Caf employee, Micah Brown.

Nicholas Cary, sophomore, saluted the “grill beeper”—a new device that alerts students when their order at the Grill is finished—and has solved the problem of students waiting in long lines.

Amber Ivey, freshman, likes the new diversity of options. She describes herself as a dessert person and says that the Caf has good dessert options. In addition, she appreciates how involved the staff is when it comes to handling even specific needs students have.

Chan shared that even with the new remodel there are still some flaws. Most of them have to do with communication between managers and faculty. As an example, Chan pointed out how it can be difficult for cafeteria workers to ensure everyone will be served properly on Northwest Fridays. This is because the cooks don’t always have accurate information on the number of people who will be attending.

Chan also added that students sometimes have allergies which cafeteria employees are happy to work around in order to meet the students’ needs. Again, communication between the Caf and students can help with this issue.

“Students complain of not having a variety of food,” said Ivey.

Ivey wishes for the Caf to incorporate more variety in vegetable choices and proteins. More importantly, she wishes the Caf would moderate the use of oil in their cooking.

NU students Skinner, Cary and Ivey all concluded with a note of an overall positive satisfaction with the Caf remodel.