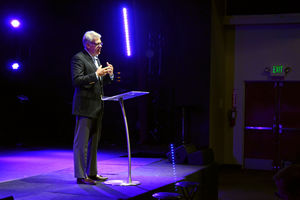 Why Ferguson Matters: An Urgent Call to Action 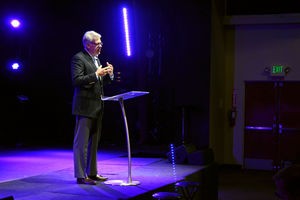 On Aug. 9, 2014, 18-year-old Michael Brown was tragically shot and killed in the suburb of Ferguson within St. Louis, Missouri. Sadly this is just one among many similar events. Ferguson has come to represent the racial inequality which residents of the United States face every day.  In an effort to examine and change the situations which can cause these racial injustices, the Governor of St. Louis assembled the Ferguson Commission.

Richard McClure served as one of the co-chairs of the Ferguson Commission.

He and his wife Sharon Buchanan McClure visited Northwest University on October 5 to speak about racial equity and their personal response to Ferguson. The McClures spoke at Wednesday’s chapel service and participated in a Faith in Society series student forum held in HSC 104 that afternoon. In addition to these events, Richard McClure gave a longer message Wednesday night in Butterfield Chapel. This message was followed by a response from Dr. Rolanda Cawthon, a professor from the College of Business.

The main topic of McClure’s message Wednesday night was “Why Ferguson Matters.” He began with the fact that events involving racial injustice often go unnoticed within certain communities not directly affected by such events.

“Ferguson, and other circumstances like it, compel us to face the long-avoided, uncomfortable truths about systemic racial inequity, and then answer the call to respond with the grace that’s given [to us],” he said.

McClure also offered three ways in which communities can effectively respond to Ferguson and talked about some of the difficult truths the people of St. Louis face.

“We found predatory ticketing practices that resulted in multiple warrants, and incarceration, and inequitable hardship…We found failing or under performing schools that trapped our most vulnerable students in poverty and into a cycle of poverty. And we found that ZIP codes were predictive of life expectancy,” he said “[F]irst, change starts, when you confront the brutal facts.”

Ferguson matters because it should elicit a response of unity, McClure said.

“Forward through Ferguson matters and is about hope, when common ground can be found. …That common ground is only found when leaders and communities serve together to form real relationships to change those conditions and to seek that reform,” he said.

In response to his message, people ask him what they can do. His response is simple:

“What you do is you form real, authentic, trusting, long-term relationships across lines for people who are not like you…Then you build on those relationships to go…do real, meaningful work together – not as a white savior coming in, but as partners…” he said.

McClure described a situation where a pastor sought help for a construction project in St. Louis after the arson of black churches there. The pastor became involved in the community in a way that focused on establishing relationships across racial lines, rebuilding not only churches but trust.

“At the intersection of those relationships that truly do kingdom work is the love of Jesus Christ,” he said.

Another part of finding common ground is applying a “racial equity lens” to any city affair. McClure said this “lens” can be applied to policies, business moves, and charities in order to “understand what disparities might…be [created].”

Perhaps most importantly the response to Ferguson is that it should spur believers to be “dealers in hope.” Ultimately, how Christians face racial equity will aid in addressing these hopeless circumstances. McClure asked hard questions and looked for ways to respond to some of the hard situations people find themselves in across the country.

“How do we put young people at the center so, children who have, no [way out] of poverty because they’ve got a failing school have a chance to get a start so they can read at grade level by grade three, ultimately get to a school that’s committed to closing the achievement gap, [so] they can graduate?” said McClure.

He ended the night with a reference to Micah 6:8.

“The opportunity to seek justice, and to do mercy, and to walk humbly before our God, is a sacred and compelling challenge,” he said.

Cawthon offered her response to McClure’s message. Her speech was both a striking commentary and a passionate call to action. Cawthon began by urging students to reflect on what they could do to help solve the problem of racial injustice.

“I ask that you just think about your life. Think about the influence that you can have in a world in which we don’t know what lies in tomorrow,” Cawthon said.

She informed the audience that she had met with several Northwest students about how to make changes at NU. These students were Petrice Bokako, Edison Cummings, Jessica Carey, and Lauren Thomas.

Cawthon asked some difficult but much needed questions throughout her time onstage.

“Are you willing to be vulnerable so that you can dismantle any biases you might have?” she said.

Cawthon closed by asking students to be a “change agent.” She pointed out that racial reconciliation is a community effort. When people are willing to reach out and have difficult conversations, they can then “dismantle systemic racism on every front.”

Cawthon concluded her message with a final statement to call students to recognize the wider effects of Ferguson.

For more information on the Ferguson Commission, visit forwardthroughferguson.org.