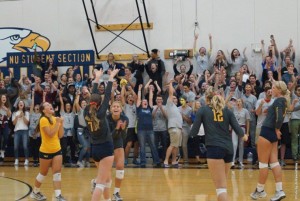 After losing to fellow conference rival and nationally ranked Corban University, NU Volleyball rebounded last week and won two straight road games. The first of which was a near upset to the Geoducks of Evergreen State College. After exchanging point for point in each set, the Eagles prevailed in the final set off of a kill from senior Dakota Adams. The second road win came against Walla Walla University, which proved to be a much easier victory for the Eagles. The Eagles proved to be dominant early and never looked back, sweeping Walla Walla in three straight sets.

The Eagles (11-4, 8-2 in CCC) have two home games this weekend, both of which are against conference rivals. First, they play Southern Oregon University on Friday night, then Oregon Tech University on Saturday. If the Eagles can win both games, they could potentially move ahead of Corban University in CCC standings, depending on how Corban performs this week as well. That would place the Eagles in second behind Eastern Oregon University, who remains undefeated in CCC play and is 17-1 overall. The Eagles have already been nationally ranked earlier this season, now back in the top 25 at No. 24, and if they continue to win they could find themselves as one of the more elite teams in the country come playoff time.

The Men’s soccer team also enjoyed a great weekend as they bounced back from an unpredictable loss. The Eagles won both of their games last weekend, as they beat Walla Walla University 5-0 and Multnomah University 3-1. Daniel Christenson posted his 17th career shutout game, proving that he continues to be one of the best goalies in the conference. Both Men’s and Women’s soccer play away games this weekend. The Men’s soccer team has the tough task of playing at Oregon Institute of Technology this weekend, as well as playing another road game against Southern Oregon University the very next day. Oregon Tech is the top team in the conference, and if NU can find a way to beat them on the road, it could prove to be a huge statement win for the Eagles.

The Women’s soccer team will play against the same schools as the men’s team this weekend, looking to prove their dominance again. They have only played three conference games so far, leaving them in the middle of the pack in the standings. Despite this, they are 2-1 in CCC play and are continuing to prove to be a very formidable team, one that could possibly play again for the CCC championship. Only time will tell how good this team really is, but with how they have played so far, there is a very good chance that this team could go farther than the CCC.

NU Cross Country Women’s placed 10th and Men’s placed 13th in the Charles Bowles Willamette Invitational in Salem, OR. Sarah Estabrook and Kyle Cole were the top finishers for NU, Estabrook finishing 35th in a field of 165 runners and Cole ran his second career best time of 28:58.5. Both teams continue to show improvement from meet to meet and have proven to have some phenomenal athletes on this team. We very well could see a few NU runners make it to Nationals this season.