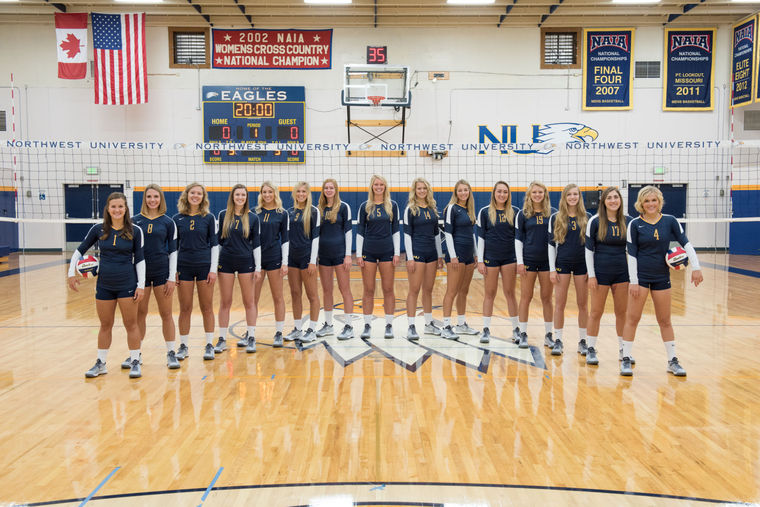 Playing for an Audience of One 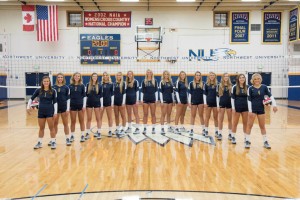 Hands joined and heads bowed, the Northwest University’s women volleyball team prays before their 7:00 PM home game in Kirkland, WA. It is a common sight here at NU, but the unified heart of these young women should not be overlooked.

Prayer before games, prayer before every practice, and participating in team devotions is integral to being an athlete at NU. Win or lose, Northwest athletes strive to create an environment of joy with a focus on spreading the light of Jesus in all they do.

The women’s volleyball team has five values at the core of the team: community, servanthood, joy, passion, and connectedness. Through these values, this team of young women gets to experience life together in the same way close friends do.

“We always stay together no matter what,” sophomore Amanda Waterman said. “I’ve been on teams where things will go wrong, and people will start separating. They bring that stuff onto the court.” Waterman has not had that same experience at NU. “We all love each other so much,” she said.

Junior Mattie Keltner credits the team’s closeness to their common faith– a connection that “a lot of non-Christian universities probably don’t have,” she said.

“The idea that we are playing for something bigger than ourselves, and not only playing for God, but we’re playing for each other,” Keltner said. “We’re playing to bring each other up, to make the other person next to you and their successes more important than your success.” This she believes is unique to their team and makes playing more enjoyable.

Junior Leia Roy said that many non-Christian teams are very individualistic and that “everyone is trying to be the best they can be.” Northwest strives against this mentality and toward one of unity. Roy said, “on our team we can encourage each other, make each other better and not so much focus on ourselves, but on the team as a whole.”

Head Coach Steve Bain has had a huge part in creating this positive environment. Waterman said “[Coach] is a servant for our team.” Bain, who has been coaching four years at NU, spends hours watching film of opposing teams and tracking tendencies, using Excel, to see how each team lines up. What the players enjoy most are the home-cooked meals prepared by his wife before and after the game.

Keltner said that the team’s overall respect for Coach Bain, his high standards for the team, his ability to keep the team accountable and striving for excellence, and how all this is done with a gracious heart, inspires her for her future. “When I’m a coach, I hope to be a coach like him,” she said.

As they start the 2015 season, the NU women’s volleyball team continues fostering excitement for the future, working to become an even better team mentally, physically and spiritually. They seek to stay true to their core values, nourishing friendships and continuing to play for an audience of One as a unified team.

Keltner summed up the team’s camaraderie; “My teammates are my very best friends.  I’ll probably be friends with them for the rest of my life.”