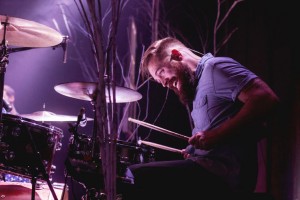 Northwest University’s Butterfield Chapel was packed with students and non-students alike on Monday night to watch local Christian bands Citizens and Saints and Ghost Ship who performed for Pursuit.

“It was small enough to be intimate, but big enough to still rock out to Jesus. I also loved the mix between the acoustic Ghost ship and the electronic rock band of Citizens and Saints,” said Tyler Flannery, a sophomore from Seattle University. “I would have gone to this concert [even] if it wasn’t free…”

Citizens and Saints were celebrating the release of their new CD called “Join the Triumph” and played many songs from the album, such as “Oh! Great is our God” and “Be Thou My Vision”. They also played some older works such as “Made Alive”. The band started out at Mars Hill as “Citizens”, but changed their name when the band left the church. Two of the members are previous NU students Nathan Furtado, who plays the bass, and Jeremy Kelderman, who does percussion.

Ghost Ship, the opening act, played an acoustic set of their songs. They play worship music at the Mars Hill location in Ballard. Despite the fact that Mars Hill recently made a decision to dissolve their church brand, Ghost Ship has not made any announcements about leaving the church, which will continue as an independent church.

“I like how the concert was more unstructured with room to move,” said NU senior Garrick Geppert. “I think chapels should be more like that so that students can walk around and pray for one another and worship in a more intimate way.”