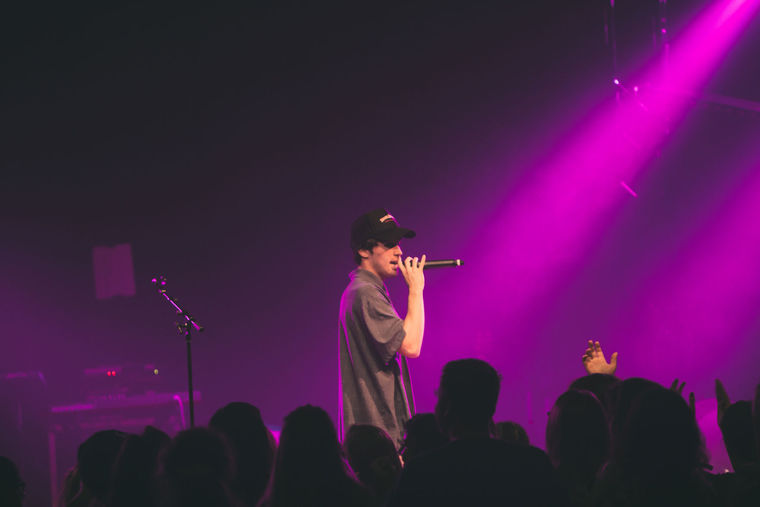 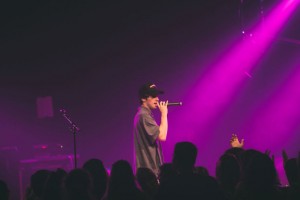 The room was still as the hushed crowd listened, entranced, to the soulful, syncopated song being sung on stage. A young man with a baseball hat stood at the front of the room, eyes closed with a microphone in his hand and two large beach balls on either side of him. He sang soft and steady, weaving seamlessly between the complicated rhythms of the introduction.

Without warning, the song jumped, grinding gears from the soulful cruise of the verse to a bumping drive of a summer radio pop song. Suddenly the beach balls were bouncing above the heads of the audience, who fought to keep them aloft while waving their hands to the beat with the dancing performer on stage. Purple beams of light sliced across the stage, and the crowd cheered as one of the audience members got up on stage and proceeded to body surf the audience.

This was the scene of the Edgar Sandoval Jr. performance at last week’s “Collide” event in Butterfield Chapel at Northwest University. Edgar was the second act of the show, following surprise guest Andrew Orwiler, also known as Prodigal Prodigy, who is another NU musician. Other musicians at the show included Victor Perez, Josh Pineda with the Syncopation Dance Company, and Landon Fleury, also known as DJ Color Coded.

Although Edgar’s performance at Collide was the first time he had ever performed at NU, Edgar is no stranger to the stage. The musical talent from his song covers on YouTube was noticed on Twitter in 2014, which led to an invitation to go to Nashville and audition for what Edgar described as a “Christian boy band.” Although he didn’t follow through with the boy band opportunity, Edgar continued to pursue his musical passion by moving to LA with the other member of the band he was in called Outcast Republic.

During their stay in LA, Outcast Republic had performances at over 50 different high schools, played at Creation Fest a couple acts before Toby Mac, attended the VMAs and the Kids’ Choice Awards, and was even featured in Popstar Magazine’s “Up and Coming” section.

“Doors were opening like crazy. We were having meetings with labels like Sony, Sony Japan, Def Jam, Universal, Interscope, all these awesome labels and all these awesome opportunities,” Edgar said. “But none of them seemed to fit what we wanted to do.”

Eventually Edgar felt a pull away from Outcast Republic.

“After doing that for about a year, God was basically calling me in different directions. I felt God had more in store for me than just singing up on stage for a bunch of screaming fans singing love songs.”

Edgar’s departure from LA coincided with his family’s move from Cincinnati to Seattle. This prompted him to look for a Christian university in the Seattle area that had an audio engineering program. The rest is, as they say, history.

Now a sophomore in the contemporary music industry program at NU, Edgar says the best thing that anyone can do in life is take things one day at a time.

“We’re all worried about what God has planned for our lives, when honestly, if I could give advice to people—to artists, it would be to take it one day at a time.”

Other advice he had for artists is to pray before you perform and to enjoy yourself on stage.

Edgar is currently collaborating with an Austrian EDM artist named Meric. They are preparing an album for a summer release in 2017. Edgar is also working as a co-producer for Heaven Bound Films for the score of a movie titled “Alan and the Fullness of Time,” which is slated for release in summer of 2017. Information about the film can be found on their Facebook page, or at http://www.heavenboundfilms.org/whats-next.