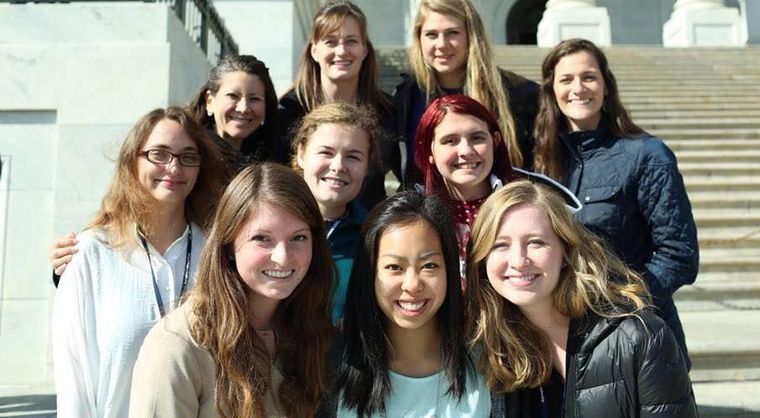 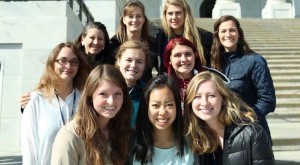 One of Northwest University’s student athletes also plays on the campus’ worship team, manages the intense load of a junior pre-med major, works in the Student Development office and holds a leadership position on NU’s student government. This busy and qualified individual is the NUSG Vice-President, Janelle Kono.

On top of schoolwork and other activities, Kono leads the Senate that seeks to improve the NU campus by funding amenities that students have expressed interest in, approving and funding clubs and working to change campus policies.

The 20-year-old from Edmonds, WA left her busy schedule and responsibilities on campus for a few days in October to attend the 2015 National Student Leadership Forum in Washington D.C. Kono had the opportunity to represent our school at this important event that assembles university leaders from across the country.

The National Student Leadership Forum is a three day annual event that brings campus leaders together to think more deeply and dream differently, going beyond the pursuit of a degree and a perfect resume. In a world where self-interest is prevalent, this event takes the opposite approach by highlighting Jesus’ examples of servant leadership, humility, and altruism.

The purpose of the forum is to inspire young men and women to pursue a life in leadership with passion and perspective and have the most influential and effective leader in Western civilization, Jesus of Nazareth, as a standard of excellence. The forum encourages students to ask questions such as, “Why am I here? What is my purpose? Who am I? What am I doing with my life that is going to make a difference?”

Kono said that her experience at the forum helped her see a much bigger world, which she had the capability to impact. “One of my favorite speakers was federal prosecutor John Richmond who talked to us about his time in India fighting sex trafficking,” said Kono. “It was inspiring to hear that despite the enormity of the problem, it was a problem he firmly believed we would be able to overcome eventually… Hearing from John and from the other amazing speakers helped me to see what it looks like to not only lead well and make a difference, but to do it as a result of a relationship with Christ.”

Kono said she benefited from being able to interact with other student leaders from across the country. “It was definitely intimidating and humbling to talk to students from large, prestigious schools. The girl I roomed with attended Pepperdine and was in the middle of applying to grad schools like Duke, Princeton, and Harvard,” Kono said.

According to Kono, being able to talk to other students about their student government roles was very helpful. She realized that many other schools struggled with a lot of the things that NU has faced this year and said it was encouraging for her to be able to compare notes and bounce ideas off other people

Kono wants to be a doctor, and she believes that some of the leadership skills she has been learning in college will be useful for her future job. “Implementing change at a small university is obviously very different than making a difference within a community, but now that I have been a part of NUSG I have a better idea of what it might take,” Kono said.