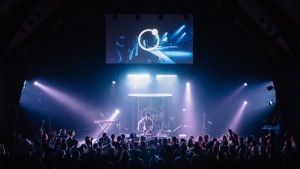 Northwest University is full of talented musicians. You’ll be hard-pressed to find someone who doesn’t play guitar, piano, and sing, or at least dabble on cajón. But not all musicians on campus fit into this traditional mold.

Landon’s path to DJ-hood was not a straightforward one. When asked about his musical background, Landon rattled off a pretty typical story; he played the recorder in elementary school and played the trumpet in middle school.

It wasn’t until his seventh grade year that his musical interests took a turn away from the traditional.

“I started attending concerts and it got me really intrigued in the different live sound things,” Landon said, “I started experimenting with electronic music…that’s when I started to do DJing.”

Landon’s DJ experience had the opportunity to grow early on, eventually performing under the name “Color Coded.” Landon performed frequently for his high school youth group and he also performed with another local DJ in a club for high schoolers called Shenanigans. He soon challenged himself to perform bigger gigs, the biggest of which was at a tourist town called Old Orchard Beach. Since he started attending NU, he has performed at many musical events like the NU Freshman Showcase, NU Unplugged, and unofficial dorm events he called, “Praves.”

When asked about his favorite part of DJing, Landon smiled.

“As a DJ, seeing people dance to your music, to the music you’re mixing…it’s like the opposite of a heartbreak. It’s like your heart mending back together when you see all these people jumping and dancing and singing the melody to a song that I spent time writing…that’s been the most rewarding thing so far.”

When talking about his creative experience, Landon mentioned the difficulties of balancing individual creativity with something he called “tastemaking.”

“I do write a good chunk of music, but I don’t often play my own material, and that’s a confusing thing to explain to people,” Landon described, “You’re playing other people’s music in a way that is less glorifying to me as a DJ but more glorifying to the audience, and here at Northwest, glorifying to God as well.”

Color Coded will be performing at a free, all-ages show called “Collide” this week, which will also feature other NU artists such as Edgar Sandoval Jr., Victor Perez, and Josh Pineda. Josh serves as the face of the label that is putting on the show, Neoteric Horizons Records.

“Collide is going to be one big, high energy, non-stop party, pop, and EDM music night!” said Josh when asked about the event, “Our end goal is to not only showcase our music, but ultimately give people a really good time and an experience they won’t forget, as well as set the tone for what to expect from us this year!”

Collide will be at NU Butterfield Chapel at 8:00pm on November 11th. Doors open at 7:30pm.

Landon is also a writer for a recognized Electronic Dance Music website called www.YourEDM.com, where he has several published articles and reviews.