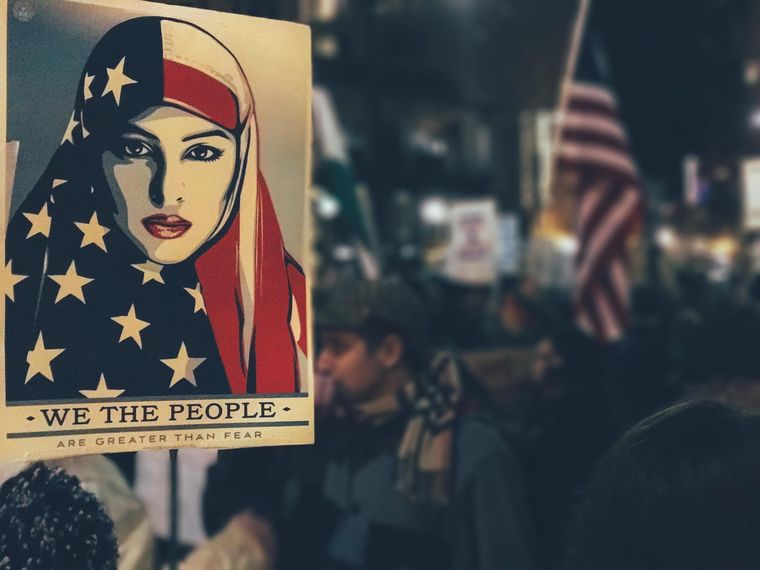 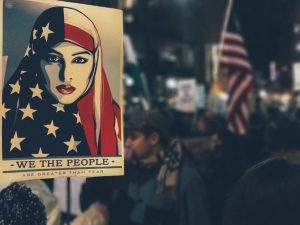 Northwest University students and faculty joined thousands who gathered on Sunday night at Westlake Park in downtown Seattle to protest President Donald J. Trump’s executive order to temporarily ban immigrants hoping to enter the United States from countries that are considered hostile. The rally followed recent protests around the country that speak out against many of Trump’s actions, and has since spurred other smaller protests, particularly in the Seattle area.

“The executive order is opposed to everything America stands for; we are a nation of immigrants,” said Matthew Bellinger, a NU adjunct professor.

Bellinger is a member of the Union for Academic Student Employees at the University of Washington (UAW). The organization saw several members protesting at the Westlake rally and wanted to show sympathy to locals whose families are seeing the effects of the ban. The UAW is comprised mostly of international students, according to Bellinger, who stated that it gave him particular motivation to join protesters, in addition to his moral obligation as a Christian.

“So many [international] students are here on visas, and if they left, they would have to drop out of school because they would not be allowed to return and finish [their education],” said Rhoya Selden, a student double-majoring in drama and history at UW.

Selden is one of the students who has to make the decision between seeing her family or continuing her education, at least for now. Selden, accompanied by Eli Gallager, another UW student double-majoring in drama and English, carried signs as they walked down 4th Avenue toward the growing crowd that read “This affects everyone, not just Middle-Easterners” and “Welcome,” written in English, Farsi, and Hebrew.

Eventually the rally turned into a march as thousands took to the streets, leaving Westlake Park and heading East on Pike Street. Among the marchers were Josh Blay and Micayla Smith, both NU students who passionately joined in the protest, occasionally leading others in chants. Smith, an Acts 6 scholar, spent six months studying abroad in Amman, Jordan where she experienced life with refugees firsthand.

“They are not terrorists; they are people who are running for their lives. They idolize America and fear their fascist, oppressive regime,” said Smith.

Diversity has been a major recurring theme in Smith’s life for some time, despite not being a minority; she was the vice-president of Key Club at her high school in Tacoma, Washington where she was involved in diversity initiatives at Life Center Church.

“So often all that happens is Christians pray about issues and hope they get better, instead of intervening,” said Smith.

Protesting has been a widely debated issue, polarizing many evangelicals. Some feel there is a moral imperative to stand up against issues that matter. Joseph Castleberry, President of Northwest University, remembered growing up during the Civil Rights Movement.

“I saw the power that Rev. Dr. Martin Luther King, Jr. had on our society,” said Castleberry. “How could you be against protest after growing up through something like that?”

Despite polarized views on protesting, many Christians seem to find common ground in the value of getting involved.

“Christians carry a special obligation to be a voice for the voiceless. What does that look like every day? Showing up to protests like this one and showing that it matters, and taking time to talk to people,” said Bellinger.

He believed this embodies the verse in the book of James, “Religion that God our Father accepts as pure and faultless is this: to look after orphans and widows in their distress and to keep oneself from being polluted by the world” (James 1:27).

Still other Christians feel being “polluted by the world” and participating in protests go hand in hand. A larger question still lingers: What can Americans do, beyond protesting?

Castleberry pointed out how the popular Beatles’ song “Revolution” brings to light an issue that protest movements commonly face: follow through. Many people new to the political scene are looking for ways to bring about real and lasting change beyond protesting.

“The real mark of the Christian is the love we show for people,” said Castleberry. “Christian love is always best expressed in concrete deeds of service. It’s one thing to say you are for immigrants and refugees, but it’s another thing to get involved with them.”

Castleberry signaled to the power of prayer as an important way Christians can get involved, saying that he personally prays for Trump daily. It may be challenging for those who seem to lack respect for the current president and administration.

“People who don’t respect him as a person should at least respect the office he holds,” he said. “That doesn’t mean you shouldn’t protest hard, but it does mean you try to tell the truth in a nonviolent way.”

With a historically controversial first week in office, Trump, and evangelicals as a whole, are going to be under scrutiny in months to come.