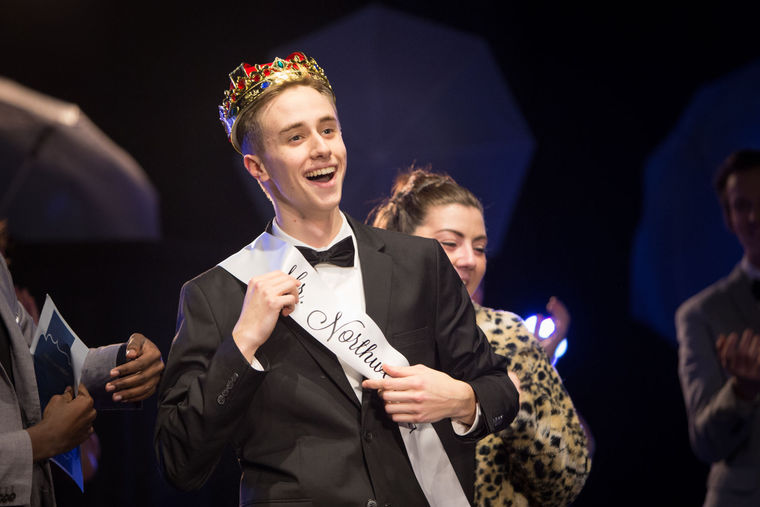 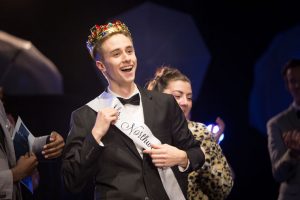 The doors at NU chapel building opened at 7:50 p.m. to commence the start of Mr. Northwest. Mr. Northwest, an annual male student beauty pageant, which was started in 2016.

The echoes of Rihanna’s song, “Under my Umbrella” rang through the walls of the chapel as elegantly dressed ladies and gentlemen entered. The song accompanied the theme, which was rain.

“We decided to add a theme, as compared to last year and the rain theme gave us more opportunities to connect with people. We also stepped up the production to make everyone visually excited,” said emcee Andrew Robertson.

Hunter Hadfield, the Director of Traditions of the Student Activities Board, welcomed students as they entered.

“This is a big event and we would like to make sure everyone is welcomed and excited to have fun. We have upgraded it from last year, and the red carpet is a great addition,” said Hadfield.

As people were settling inside the chapel, there were chatters of excitement and giggles. A countdown timer appeared on the screen and at the seventh second, everyone began to countdown together in unison.

As each contestant was introduced, they were met by excited cheers from the audience.

The highlight of the evening was the talent portion. Watling wowed the audience with his imitation of Napoleon Dynamite’s dance moves, Pickens turned his face into a symphony orchestra by expressing every sound by changing his facial expression, Daniels and O’Hagan both performed standup comedy routines, Hashley provided the audience with his satirical approach to fitness, Brown created one of his infamous pizzas from the cafeteria, and Christopher attempted to solve a Rubix Cube in under two minutes.

Robertson called for drum rolls from the audience as he prepared to announce the winner.

“The winner of the 2017 Mr. Northwest Contest is…Stephen Pickens from the Ducks and the Chics!” said Robertson.

Pickens was thrilled to be crowned Mr. Northwest.

“It was incredible; the whole experience was just bro bonding. It was so cool to see the other contestants express themselves as individuals. None of the acts were similar but they were all equally funny. I am super honored to have won and it was a blast,” said Pickens.

To the future contestants, “It is not about winning it’s about having fun,” Pickens said.

Tristan Norris, a Resident Area coordinator and co-emcee, was impressed by the changes made this year.

“It was incredible to not only watch the behind the scenes, and the end product but also continue to see the ridiculous amount of talent,” said Norris.

Freshman, Sydney Hollefreund, thought this was a great event.

“It made me wanna go up there and join them.” It is a good way to take a break from school work and have fun and build community,” said Hollefreund.