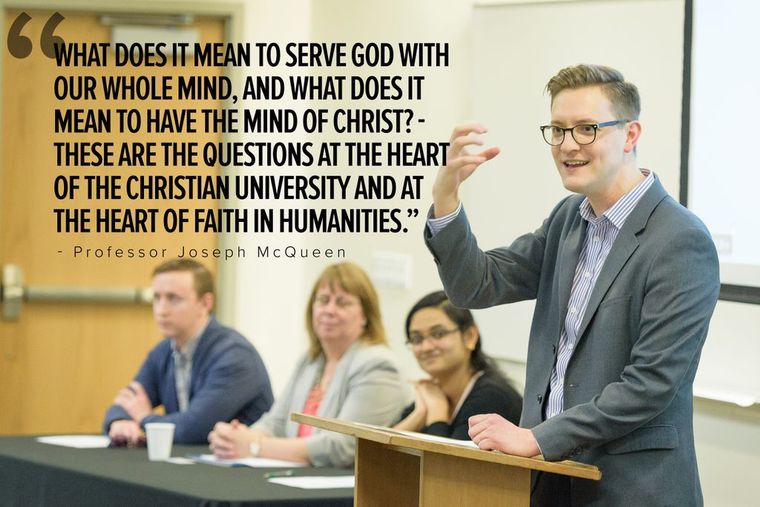 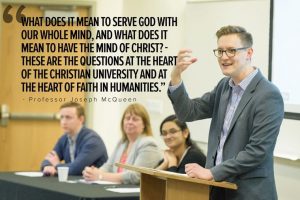 For the past eleven years, Northwest University has put on an academic conference called “Faith in Humanities” where students, staff, and faculty can highlight their academic achievements. Each year’s conference orbits around a predetermined theme; this year’s theme was “Do Justice; Love Mercy.” The conference was on Mar. 23 in the Donald Argue Health and Sciences Center R104, running from 3:00 p.m. to 9:00 p.m.

Every year, the Northwest University English Department and Sigma Tau Delta (an International English Honor Society) cosponsor the event. It is the most prestigious event that the department puts on. However, for many attendees like Edison Cummings, this was the first time they had ever attended the conference.

“The first time I remember hearing about Faith in Humanities was when I visited the [English] department the first time,” said Cummings. “[This conference] is a reminder that humanities are a key part of humanity’s progress…It’s encouraging to see individuals who continue to value the cultural importance of the arts, history, classics, philosophy, and the humanities.”

This year, Assistant Professor Joseph McQueen served as the conference’s master of ceremonies, a role he was more than familiar with; McQueen helped found the Faith in Humanities conference nearly a decade ago when he was a junior at NU.

“When I was a student here, my mentor [Martha Diede, an English professor at the time] and I were talking about what we can do for the NU community to boost the academic profile on campus,” said McQueen. “We decided to hold a conference where students and faculty can showcase the best academic work happening in classes.”

McQueen iterated that the point of the Faith in Humanities conference was to explore the question of what it means to have the mind of Christ.

“What does it mean to love the Lord your God with all your mind? This [conference] is the place to ask that question and to try to give a serious answer. We need to be disabused of the notion that because we have access to Christ and the Gospel that we shouldn’t care as much about thinking about the rest of the world. No, on the contrary…Paul says ‘in Him we live and move and have our being.’ That means in anything that exists, anything that is sustained by His love, any academic inquiry, any area where you can inquire deeply into something, [that] is an area where you can encounter God in a profound way.”

The conference featured several presentations throughout the day on a variety of topics. It began with a student panel that explored the topic “Justice, Mercy, and Immigration,” followed by another student panel that discussed “Gender Justice in 19th Century British Literature.”

Carissa Climer, a senior English major with a writing concentration, was one of the student speakers in the panel. Her presentation focused on a paper she had written in her Literary Theory class in the fall of 2016 that explored the topic of feminism in Charles Dickens’ book “Great Expectations” through the character of Miss Havisham. Climer stated how thankful she was for the opportunity to read the paper before saying that she hopes her paper sparks thoughts about ideal feminism.

“[My paper] tied into the topic [of ‘Do Justice; Love Mercy’] by working toward justice for women,” said Climer. “A lot of people give feminism a bad rap these days, but it’s just about equality for men and women. Feminism is a good thing. It can be taken too far by a lot of people, but we need to raise awareness about the good that it can bring about.”

Apart from the panels, other students were honored for their work. Stephen Waggoner won one of the 2017 Sigma Tau Delta essay competitions for his paper that analyzed the protagonist’s perspective of his father in the play “The Glass Menagerie.” Allison Elliot was the winner of the Poetry competition and read her work titled “No One Knew But I,” a poem that explored Jesus’ perspective of the Last Supper. In the Research and Criticism category, Abigail Lawrence won the award for her research paper titled “Infinite Truth.” Her paper opposed the deconstructive belief that meaning escapes words and therefore erupts into chaos by arguing that the only reason meaning escapes words is because God is infinite truth and humans are finite creatures.

“When you look at a specific word, the reason it doesn’t contain truth like we would want it to as humans…is because [truth is] continually expanding. Kind of like how the universe is continually expanding,” said Lawrence. “[This argument] claims that the entirety of truth and God is so big that there’s no possible way that we could bring it into a single center that is understandable to our finite minds in our fallen state.”

Other students who were awarded accolades for their work were Hannah Andersen (who won the Julia Young Prize for her work of Creative Prose and Drama) and Sarah Clark (who won the Kent Hartje award given to the top graduating senior.)

Students weren’t the only presenters at the conference, however. Assistant Professor Dr. Jeremy Delamarter gave a presentation on Wendell Berry and the importance of local community, challenging the audience to think of their neighbors as the nearest members of the global community. Assistant Professor Dr. Clint Bryan spoke on the nuances of racial relations in the context of patronage for artists of color, citing such works as H.G. Wells’ “The Invisible Man.”

The final hour of the conference was scheduled for the keynote presenter Associate Professor Dr. Jeremiah Webster who read several pieces from his recently published book of poems titled “After So Many Fires.” Webster’s work had several different tones throughout the night. One poem described a battle that Webster had with a hornet’s nest and a can of Raid. Another poem explored Webster’s complicated relationship with his mother, who he had not met until a couple years ago. Webster even said that one of his poems took him ten years to write.

Although several audience members remarked on how much they enjoyed the staff and faculty presentations, McQueen stated that he hoped that in the future, more student presenters would be present in Faith in Humanities.

“I want this to be a student driven conference. [Staff and faculty academics] can go to our own professional conferences and give papers to our peers at professional guilds. [Students] don’t get that opportunity as much,” said McQueen. “I want this to be a place where [students] get a flavor of what it is to do serious academic work and share it.”

“We have categories in the essay contest, and the only thing that is a limiter for [work submitted] is that you’re a current student and that you’ve written the work within the last year of the deadline,” said Witt.

For these professors, the Faith in Humanities conference is more than an opportunity to show off one’s work. It’s a chance to use the academic skills that are being taught at the university to exceed, think well, write well, and speak well.

“These are good opportunities to get your work out there and see where your work stands on a university-wide basis, not just ‘Did I fulfill an A in a class?’” said Witt. “Hopefully that inspires students to keep writing work beyond classrooms and assignments. We write because writing helps us learn and helps get good ideas out there.”

McQueen’s desire for academic excellence is obvious as well.

“I want to create a buzz around being an intellectual on this campus, around being smart and thinking serious thoughts in the service of the Gospel. I think that’s vital, that’s why I’m here,” said McQueen.