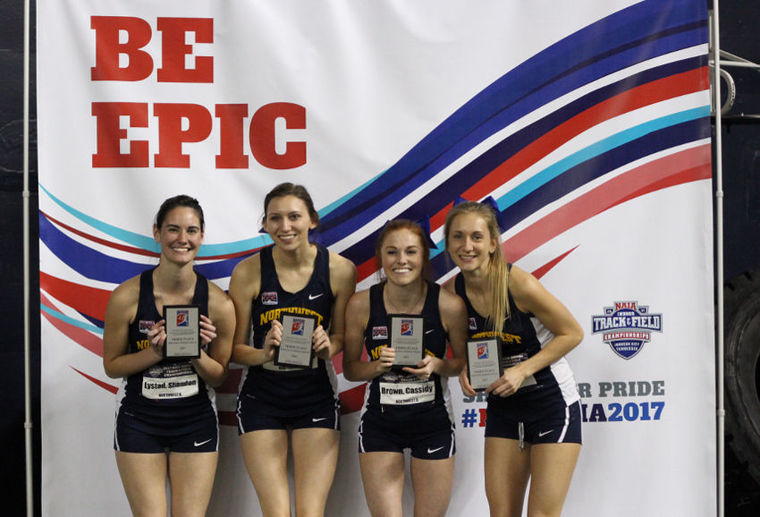 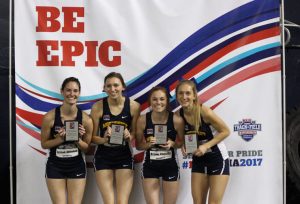 That season began with the Eagles facing a choice of strategy. Indoor track is something of a unique animal, with no true equivalent in other sports and requiring a different approach.  The season is short, quality races are few and far between, and it’s during a time of the year that is traditionally devoted to “base” training: logging high weekly mileage to build strength for the outdoor season to come. With the women’s team boasting a deep stable of national-caliber athletes, their athletes could focus on individual events of specialty, or direct their efforts to one of the relays that would be run at nationals: the 4x400m, 4x800m, or the Distance Medley Relay (DMR).

The Eagles chose the latter, and their first chance to test the approach came at the UW Indoor Invitational on January 28, where they entered the DMR. For this meet, the 1200m leg, 400m leg, 800m leg, and 1600m anchor leg were run by junior Lily Engelbrekt, senior Shandon Lystad, junior Sarah Estabrook, and junior Cassidy Brown, respectively.

Engelbrekt and Lystad kept the Eagles in the mix through the first two legs, and then passed the baton to Estabrook. Though she has been more of a long-distance specialist, Estabrook ran extremely well, coming away with a personal best for the 800. Brown also ran a personal best, breaking five minutes in the 1600 for the first time. The Eagles took fourth in the race, and more importantly established an NAIA-leading mark, snagging both conference and national Athlete(s) of the Week honors for their 12:04.35 performances.

The Eagles went on to compete in the DMR at the UW Husky Classic on Feb. 11. Lystad was away for her senior nursing trip, so freshman Emma Horn stepped in for the 400, while Engelbrekt and Brown swapped legs. Despite this shuffle, the Eagles bettered their previous time to 12:04.35, taking eighth place and retaining the NAIA lead.

Two of the Eagles, Estabrook and Engelbrekt, doubled back into the UW Indoor Open to get a feel for what running in finals at nationals would feel like, and did so in spectacular fashion. They both notched “A” standards in their respective events despite having raced two days prior.

The Eagles then traveled to Johnson City, Tennessee, for the NAIA Indoor Track and Field National Championships, which occurred March 2-4. The team faced semifinals on Thursday to qualify for the final on Saturday.  Lystad rejoined the team, returning the Eagles to the lineup from the UW Invite of Engelbrekt, Lystad, Estabrook, Brown, with Horn accompanying as the alternate.

The Eagles semifinal heat came down to a photo finish, with less than a second separating the top four teams. Oklahoma City and St. Francis took first and second places, and the NU Eagles took third at 12:03.67, qualifying for the final and continuing to improve their season mark.

The final on Saturday provided one of the most thrilling races of the meet. Engelbrekt once again lead off for the Eagles, rocketing out to a lead early in her leg, buying some breathing room for Lystad. Lystad lost ground to some of the 400m specialists she faced (she is a 3000m steeplechaser by trade), but kept the Eagles close. Estabrook took the baton from Lystad, and again ran a personal best for the 800 (2:16 unofficially) while bringing the Eagles back into striking distance. Brown took the baton to anchor, and she surged into the lead over the first few laps of her leg. She still had the lead with 400m left, but over the last lap two athletes closed down the gap and passed. Brown crossed the finish line for third place, with the Eagles clocking 12:00.93, the second-fastest time in NU history.

All four NU athletes ran well, fighting over every stride and earning their place as third in the nation. The accomplishment will give the team motivation for their outdoor seasons, as they seek to build on the momentum they have established and continue to climb higher.