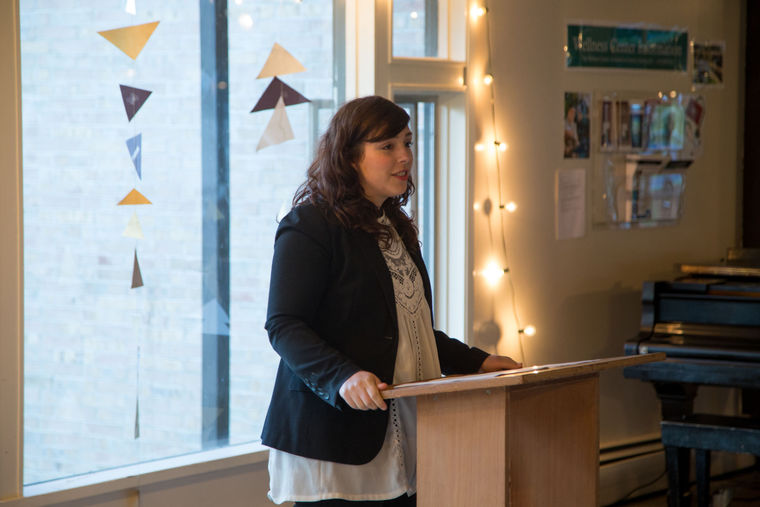 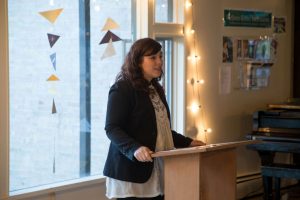 On Thurs., Mar. 30, Professor Amy Sjoquist spoke at the Last Lecture held in Perks Lounge. Sjoquist is an adjunct political science and philosophy professor. This is her last year teaching at Northwest University. The influence of her undergraduate studies in philosophy, theatre, and theology were all highly evident in the execution of her message. The Lecture began at 7:00 p.m. and was titled “An Ode to Books.”

Sjoquist began the evening by passing out a Works Cited for her speech—a list of book titles and their authors—which she quoted from throughout the night. Sjoquist recited numerous excerpts from literary greats including G.K. Chesterton, Dorothy L. Sayers, and Saint Augustine.

Sjoquist then walked the audience through pivotal moments of her childhood and adolescence, touching on topics from facing reality to self-acceptance to the true definition of success.

In a world where people’s lives have become increasingly romanticized through the use of social media, Sjoquist addressed the modern-day philosophies of escapism and idealism. Her formative years consisted of reading many books, and finding a fulfillment in life mainly through those books. However, she soon discovered that living in her head was not ideal.

“I lived in my mind. And that carries with it certain terrors and cultivates certain longings. The sweetest thing in all my life has been the longing to find the place where all the beauty came from. But I couldn’t find the beauty outside the books, not in any real and tangible way. I developed a kind of wakeful sadness,” Sjoquist said.

According to Sjoquist, this discontentment led to a world-weary, confused outlook on life. Eventually, as she grew older and gained more experiences, this outlook began to change.

Sjoquist explained this transformation by quoting author Patrick Rothfuss’ “The Slow Regard of Silent Things.”

“I was learning to be something that was ‘wise enough to know itself, and brave enough to be itself, and wild enough to change itself while somehow staying altogether true,’” she said.

Sjoquist also pointed out the dangers of focusing on success, academia, and achievement to the point of neglecting friends, family, and even one’s spiritual life.

Sjoquist’s hope for the evening was that students would know the real definition of success: searching for their truth.

“Success doesn’t come in the form of a degree. It doesn’t necessarily come in the form of monetary achievement. The concept of our idea of success is often self-defeating, but if you can learn to be truly and completely yourself, you know a life searching for truth is not such a bad thing,” Sjoquist said.

Students loved the candidness with which Prof. Sjoquist shared her story.

“She is one of the best and most honest professors I’ve ever had, and I think she just has a beautiful way of expressing truths that everybody feels,” said NU junior Rebeca Ilisoi.

Dr. Sjoquist will soon carry these truths with her to Cambridge University. It is Sjoquist’s last year at NU, and she and her husband will be involved at the University of Cambridge in the UK this fall.