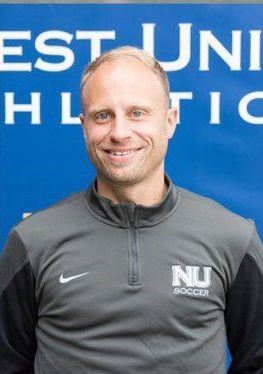 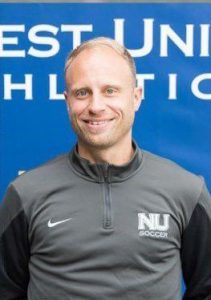 Bryan Chud is Northwest University’s Women’s soccer coach. Chud is a 2002 graduate of NU, and a 2015 inductee into the NU Eagle Hall of Fame. He still holds the school record for career goals. In 2004, he and his wife, Brienna, moved to Dungannon, Northern Ireland where he played for the Loughgall FC and helped launch Ambassadors in Sport Ireland.

Chud explained why he came to NU in the first place.

“I came to Northwest largely because of a girl,” Chud said. “I was a bit burned out [with the game at that point], just tired, and I had promised my parents I’d get an education at some point. I was like, ‘I’m 22, it’s starting to get away from me a bit, maybe now’s the time.’”

His decision paid off. Chud had a spectacular playing career while at NU, and more importantly says he rediscovered his love for the game during his time as an Eagle.

After graduating, he and his wife moved to Ireland as Chud continued his pursuit of a professional career. He said some of his favorite years came while playing in the Irish Premier League, and the experience he gained playing in a lot of different systems and under various coaches helped his coaching tremendously.

His favorite memory while playing is a moment that would have made for a Peyton-Manning-level walk-off victory to end his career.

“I scored in the Irish Cup final, the game winner in 2012, and I should have retired on the end of that, but I couldn’t resist coming back and playing another year or two,” said Chud. “I had been injured for a while, so I was subbed in with sixteen minutes left [to play]. It was tied 2-2 and I scored the game-winner, and then was subbed back out with four minutes left, so it was a nice little cameo.”

After hanging up his cleats, he searched for what to do next.

“I retired from playing in 2014 and I wasn’t sure what I was going to do. I couldn’t decide and so I went and got my ski instructor’s license in Austria. Not a great family move [since] my two [twin] boys had just been born. I started my coaching badges [the licensing process under the Irish Football Association and Union of European Football Associations] thinking it’d be nice to have that on the side,” he said.

Then the Pacific Northwest called again.

“I came back here and was inducted into the Hall of Fame in 2015, and [NU Athletic Director and Men’s Head Soccer Coach] Gary McIntosh asked if I would be interested in joining his coaching staff with the men’s team. I was like ‘Yeah, why not?’”

As for the culture shock of the repeated hops from the U.S. to Ireland, Chud said he was not particularly phased by it.

“Our hearts are probably in Ireland, we were there for twelve-and-a-half, thirteen years, but I’m pretty adaptable. I like the school, I like the people I work with, I like the team, and we had quite a solid group of friends from when we both went to university here,” he said.

His first season at the helm was in many ways even more incredible than his playing days. An unprecedented Final Four run into the NAIA semifinals, the first for the Eagles and the only unseeded team in NAIA history to do so, capped off a spectacular run that defied all expectations, even Chud’s.

“I’d love to say of course that was the aim, but I wanted to be competitive in the conference—build the girls up. I knew we had a talented team, and I just wanted to build them into a cohesive unit,” Chud said. The girls, to their credit, they bought in to everything I was trying to implement, I had a great staff around me, and things just kind of clicked. We peaked at the right moment, as we were going into the playoffs, and they got the formation down that we were trying to get them to play. It just went from one game to the next, we just kept getting better.”

“I’m switching up the formation; we’re foregoing a defender for another attacker, [shifting into a 3-5-2, a formation with a very aggressive-minded philosophy.] My personal brand is more offensive to be sure, but I’m also aware that you have to adapt to what personnel you have in the team, [the 3-5-2] requires a high soccer I.Q. and talented midfielders, and fortunately we have that,” he said.

Chud foresees recruiting wars with larger schools as the biggest challenge with coaching at NU.

“Being a small private school, it can be difficult to compete financially with other schools that have more resources than us,” he said.

As to the age-old question of what to call the sport, Chud is dogmatic.

“It’s football. Come on. It’s funny, because the first few months of being here, I was using the language I’ve been using the last 20 years, and I kept switching it to football, and the girls even started talking about it as football a bit and referring to the field as the pitch, so we’re going to keep it proper. [The game] didn’t start here,” he said, therefore it should be referred to as football.