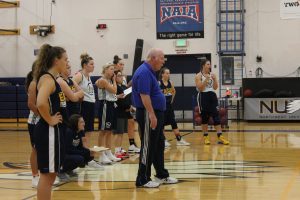 Imagine having to drive down I-5 South during the highest peak of the lunch rush hour—traveling 87 miles from Bellingham to Kirkland in less than two hours in order to make it to class on time; avoiding fender benders that create almost 30 more minutes of travel time, and not having enough funds in the “Good-to-Go” account to use the express toll lanes.

Now, imagine that same trip, twice a day, for five days a week. It seems like an outrageous idea to travel 174 miles a day for school or work. But there is one Northwest University faculty member who has done it every week for the past five years.

Ken Crawford, head coach of the women’s basketball team, travels more than 800 miles a week both to coach and to teach at multiple college campuses around Washington, including NU.

Crawford has coached and taught for 41 years at colleges around the Northwest, from Western Washington and Biola Universities, to Whatcom Community College and Bellingham Technical College, among others. He tried retiring 12 years ago, but only made it two weeks before he decided to start teaching and coaching again.

Crawford spent six years at Biola University while still living in Bellingham. He made the commute across three states for a coaching and assistant athletic director position.

“It was almost a mission’s trip to travel there, so when Northwest called and offered the position here, my wife said commuting over three states is a longer trip and this is no big deal,” Crawford said.

At NU, Crawford teaches U.S. History and Political Science, as well as a couple of online history classes.

As a professor, he sees that students aren’t able to find time to wind down in such a fast-paced world. At times, students don’t have the time to sit down and reflect on the day of on life because we are always on the go. During his two hour commute to work, he uses the travel time with reflect on life and reflect on his work through faith.

“The still point really is our faith. We’ve gotta be able to slow down in such a fast-paced world where all we want is answers,” he said.

Finding time to center his faith comes while driving with the radio off and really focusing on God. He invites students to try and re-center their life on God in a world that focuses on being fast when we need to be slow.

Charmaine Bradford, senior guard, said that Crawford is one of the most selfless coaches she has ever had.

“He knows a lot about the game, just try to pick with his head and you’ll find out,” Bradford said.

When Bradford was a sophomore, one of her family members passed away and Crawford didn’t think twice to drive from Bellingham to Kirkland to pick her up and comfort her during her time of need.

“He let me stay with his family, and bought me a plane ticket to go home [East Palo Alto, California,] so that I could spend time with my family. I’ll always play hard for him,” she said.

Crawford is known as a coach, professor, husband, father and grandfather, but would like to be known as a mentor.

“I would like the students to know that I am accessible and can be someone they are willing to talk to. My office is always open,” he said.