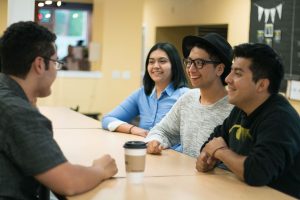 Northwest University’s VIDA club hosted a movie night on Sept. 26 to discuss the topic of culture, Hispanic and Latino identity, and most importantly, DACA.

VIDA is a student-run organization that promotes diversity among the NU community through recognition of Hispanic Christian identity and a community of belonging. Last week, VIDA kicked off the school year by showcasing the film “Spare Parts,” which displays the uplifting true story of four Hispanic high school boys. The film spurred conversation on the urgent issue of immigration and the support of the Hispanic and Latino community, an important discussion with the recent DACA announcement and its impact on the NU community.

Deferred Action for Childhood Arrivals (DACA) is a federal government program created in 2012 by former President Barack Obama. DACA allows undocumented young people who were brought to the United States as minors – known to the program as “Dreamers” – the temporary right to live, study, and work in America.

According to The New York Times, 800,000 Dreamers will be affected by President Donald Trump’s choice to end the Obama-era program that protects them from deportation. If President Trump decides to phase out the DACA program, thousands of Dreamers could lose their jobs and the opportunity to complete higher education. In the NU community, there are students who are currently protected by DACA, but fear the effects if DACA is phased out.

“DACA as a policy affects NU students differently,” said Dr. Nina Hanson, Director of Multicultural Life at NU. “If an NU student is an American-born citizen or took the citizenship test and obtained citizenship, this has no direct bearing on their status. If an NU student is undocumented and is covered by the DACA policy – with the recent decision to rescind the program through the Trump administration, they become more vulnerable to deportation to a country they have never known personally.”

Dreamers at NU chose to remain anonymous, but there are several ways the NU community can show support toward multicultural students.

“One of the most important ways is to show support, attend and be present at Multicultural and International Student events… NU community members can actively initiate conversations and genuinely hear the stories of diverse students. An equally important measure is to take one’s learning seriously and begin to learn more of how and why multicultural types of issues are present in our culture and society today,” Hanson said.

“The fear is what will happen if DACA ends? Will Dreamers be able to continue college? DACA is the hope and opportunity for Dreamers to obtain a higher education, career, and a better future,” he said.

It is important because we all have agency and a say in what makes up a multicultural community. Northwest University IS multicultural. We ARE multicultural. To not acknowledge this fact is to deny who we actually are,” she said.

DACA is an ongoing issue that should be kept in the loop of conversation, said Silva. It should not be disregarded, for it affects Dreamers at NU.

“There are DACA students here at NU and our club, VIDA, is here to support these students. DACA students need support from their fellow peers, whether that is directly or indirectly,” Silva said.

VIDA meets every first and third Friday of the month, and anyone is able to join. Members and visitors don’t have to be Latino, just willing and open to learn about the Hispanic culture, community and spirituality.