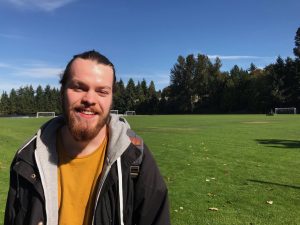 At a glance, Northwest University junior and communication major, Josh Blay, is the typical college student—he works full time at Overlake Christian Church as a facility supervisor, goes to school full time, and writes music in his spare time. However, one thing that makes him stand out among other NU students is his work with war refugees.

Blay first began to consider working with refugees during his trip in Malawi, Africa.

“I saw that having material things was not going to bring me happiness, because the people that I worked with in Africa were the happiest people that I had ever been around and they had nothing,” Blay said. “That started a thought process in me of, ‘What would it look like to serve those in need and not to care about how much I have, but how much I can give?’”

Blay’s thoughts regarding working with refugees were stoked again when he took a class at OCC titled “Encountering the World of Islam.”

“I asked our missions pastor, ‘What can I do to work with refugees and get involved?’ She said she would send a couple of emails, but two weeks later I came back to her and she said she heard nothing back,” he said. “We spent some time praying that day, and about two hours later, she got an email back from a guy who was willing to have me intern with him in Germany.”

About six months later, Blay was on a flight to Germany, where he spent three months working with refugees from Syria, Iran, Eritrea, and Afghanistan. Working with German and American missionaries, Blay and his team went to refugee camps to serve the emotional and spiritual needs of the people there.

“We were organizing community events, and would talk about Jesus,” Blay said.

Blay explained that many of the refugees in the German refugee camps have some level of post-traumatic stress disorder, have been tortured, or seen loved ones killed. The reality of the situation did not match the expectations he had before going to Germany.

“[It made me] think about the parable of the four soils, how only one of those soils produces a crop. I went over there with a mindset that I was going to be this kind of savior for these people…I was going to lead hundreds of people to Christ and it would be this magical experience. But it was actually really hard,” he said. “What we found was that most of the people we told about Jesus didn’t want [to believe us] because he is a prophet in Islam. There was a lot of rejection.”

In the midst of that rejection, however, Blay and his team believed in their purpose for being there.

“There were also moments where we saw people came to Christ. I was able to be a part of a baptism of 15 Iranians in the Main River in Germany who decided to follow Jesus. We planted a church with them!” Blay said. 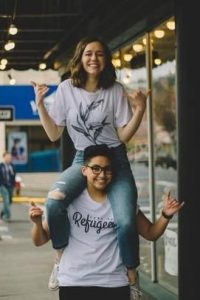 Since his return from Germany, Blay is still involved with war refugees. He volunteered last year at World Relief, where he wants to work after graduation. He started his own company called Tees for Refugees which sells t-shirts and gives the net proceeds to non-profits working directly with refugees.

“My mission with [Tees for Refugees] was to raise awareness, because I think so many people don’t know what is going on, especially when the media is not covering it,” he said.

Blay challenges NU students not to wait to get involved in making a difference in the lives of people that are suffering from wars.

“Do something! Too often we think, ‘Oh, I can’t change all of this,’ but if you can change it for one person, it was worth it,” he said.