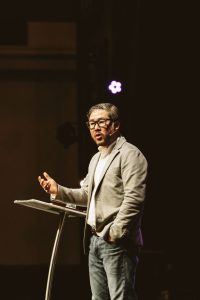 Campus Ministries collaborated with Dr. Nina Hanson to bring Pastor Eugene Cho, founder of One Day’s Wages, to Northwest University to speak at chapel last Friday. Hanson explained that the timing of Cho’s sermon was fitting in regards to Campus Ministries’ theme “Follow,” which was scheduled to talk about how to embrace different cultures and races within the church.

Hanson works to develop cultural diversity in ways that are both practical and helpful at NU. Hanson’s position on the Spiritual Life Committee allows her to work with Campus Ministries to help choose speakers and, according to her, multiple students independently requested that Cho be brought on campus to speak to the student body.

“[Cho is] committed to Gospel-centered diversity… [and works to] bridge practicality, the heart for justice, and the Gospel together,” Hanson said.

Cho began his sermon by talking about his background and family life, before diving into the biblical story of Jesus talking to the Samaritan woman.

Cho used the example of Samaria to show that people have and continue to avoid the roots of social injustices in the world. He explained that there were many other things that people could have done to try and reconcile with “Samaria”—a term that was often used to refer to all examples of unjust situations. They may have prayed, talked about, thought about, or even rapped about “Samaria.” Even though they may have had good intentions, choosing to walk around the problem because of discomfort is not going to fix the troubles of racial injustice.

“…Those things might be relevant, but it’s radically different than walking through ‘Samaria’,” Cho said.

The whole meeting between Jesus and this woman was considered scandalous because of her reputation as an adulteress and a Samaritan, but Cho used the passage to show how Jesus’s life is the ultimate example of racial reconciliation.

Cho’s message focused on learning how to embrace the discomforting feelings that the Gospel inspires.

“‘It is no use walking anywhere to preach unless our walking is our preaching,’” Cho said, quoting St. Francis of Assisi.

He shared that the first step in reconciliation is looking each other in the eye and acknowledging that everyone is created in the image of God. Cho supported his point with references to the woman with internal bleeding and the Samaritan woman.

Cho corrected the statement of division being a heart issue by emphasizing the effects of social systems and the impact of deep-rooted generational hatred. Therefore, Cho’s message revealed the inner struggle between Christian calling and inherent selfishness.

Students and faculty were emotionally inspired to pursue change within their church and communities. Cho’s message ignited feelings of justice within the NU community and showed that racial injustice is a never-ending problem in the modern world.

“I genuinely enjoyed having him here because he was spot on with tying justice with the Gospel, especially the part about taking justice out of God and making it a ‘liberal’ agenda and the part about how talking about reconciliation with ‘Samaria’ is different from walking through it,” said Jelsy Gundao, NU student and chairperson on the Multicultural Organization of Students Active in Christ (MOSAIC).