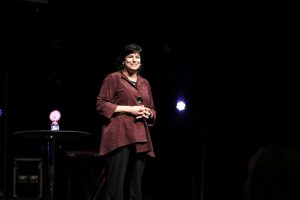 Janet Weiss, president of British Petroleum Alaska, spoke in Chapel last week on invitation of Dr. Joseph Castleberry and was the first Faith in Society speaker of the semester. In her chapel sermon she walked those in attendance through her life, teaching lessons she had learned along the way, and in her second address later that day focused on her professional life.
Her second time speaking was followed by a brief Q and A forum, and after that a discussion hosted by the English department.

Weiss began her chapel sermon with the dreams and goals she had had growing up. This recurred throughout the sermon and was heavily emphasized.

“If you get nothing else out of this, it’s about dreaming big and dreaming hard. My father was a chemist and his dream was to cure cancer. He taught me to dream big,” Weiss said.

Weiss also devoted much of the sermon to a crisis she had gone through when she and her husband wanted a family, while also wanting to maintain their respective careers.

“I had big dreams, but I wanted a family and the world says you have to choose. Could you do both? Was God calling me to do both? Society would say you need to make a choice; sacrifice one or the other. But the Lord provides,” Weiss said. “There was another woman at BP in my predicament, who also wanted to work and have children, and we were able to split my job half and half. That tension of ‘not enough hours in the day’ was gone and it was all the Lord.”

This was not the only challenge Weiss faced as a woman in her career. Another was how she was expected to behave, and how she was a statistical minority at BP. Weiss couldn’t reach her full potential until she reprioritized.

“How can a woman be heard and make an impact in a company of 80% men? I was acting and communicating the way I thought would be acceptable. Until I realized I was listening to the wrong voices, and that who I really am could be a lot more effective,” she said.

During her faith in society lecture is when Weiss began to delve more into her professional history, and the lessons she learned as a leader. When she took her position as president of BP Alaska, it was during a time when an already difficult position was made even more so.

”Before taking my position oil prices had been going up 10-11 percent a year, while our oil was going down. And one of the first things we needed to do was figure out our mission. We had our core value: safety and that came first. Just as you need to stick to your values in your personal life, you need to prioritize the values that matter to your company,” Weiss said.
This was also a time when Weiss learned more about leading individual people, and how that can be more meaningful in a crisis.

“It’s amazing what people can do when they collectively see a problem and come together to fix it. And as a leader you need to paint a crystal clear picture of what is needed from your people. How you treat people, and behave with people in those challenging times is when God gets the glory,” she said.

Environmentalism was not brought up in either of Weiss’ addresses, however, she said she obeys the scriptural obligation to steward the Earth while being in her position at an oil company.

“I am in energy, and here you do it as responsibly as you can, and in a way that progresses humanity. Without gas you wouldn’t have airplanes, heated homes, plastics, and you would have more poverty. You wouldn’t expect BP to care about the environment but we do,” she said.

Castleberry ended the faith in society lecture with a prayer for Weiss, and for BP.