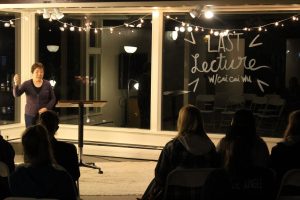 Dr. Caicai Wu, the Science Laboratory Supervisor at Northwest University, shared her wisdom with students from the Last Lecture podium in Perks Lounge on Tues., October 10. Wu began with a brief introduction of her many accomplishments, such as more than 20 written articles, seven patents, and a Washington Certification of Mandarin Chinese medical interpretation. But all of these dreams she achieved were not handed to her on a silver platter.

Wu grew up in China during the Cultural Revolution, which she described as a severely turbulent time. She explained that she felt uneasy during this time due to her parents’ high degree of education; both her mother and father held college degrees from prestigious American universities. Wu recounted attending youth meetings where Red Guards would pick certain children out of the crowd and force them to declare that their parents were “bad.” Still, all her life Wu longed to attend college.

However, at age 18 Wu was sent to a re-education camp that was a three-day train ride from her home in Beijing. At the camp she worked about 12 hours a day carrying bags of grain so large that two men had to lift the grain bag onto her back, before she carried it down a ramp to empty it.

After working at the camp for four years, Wu returned to Beijing; she was assigned work at a charcoal manufacturing plant. While she was nominated to be sent to college at age 23, she ultimately was not selected to go to college at that time under the Chinese government’s under 25 years of age “lid.”

Though this realization hit her hard, two months later Wu said, “Never mind. I have this job. I need the knowledge. Never mind the degree. I [will] just shoot for knowledge.”

Placed in the laboratory setting, she found books about chemistry and taught herself high school and college level chemistry to learn how to better execute her job, even though she thought she would never be able to attend college. She studied on the bus to work, and after work at the factory from 4:30 or 5 p.m until 8:30 or 9 p.m. without dinner. Then, when she arrived home, her mother insisted that Wu listen to the English radio to practice her English. It was around this time that Wu began to dream about being a scientist who could communicate with foreigners. She began translating for foreigners who came to China.

In 1988, Wu came to the United States to study chemistry at the University of Washington. When her American host mother prayed, she remembered thinking, “it must be this God who brought me to the United States.” It was in the States that Wu initially attended church, relishing its atmosphere, but she was not ready to surrender her life completely due to the indoctrination she was subject to in China.

After her husband traveled to the U.S. with their son in 1991, Wu sent her children to Christian school. Her children were Christians, and she knew they were praying for her, but she still was not ready to jump in feet first.

When Wu’s husband died of a heart attack, a Christian widow at her work took Wu under her wing. This woman took her to lunch, relating to her due to their similar experiences. Wu resolved to go home and pray with her children following one of these luncheons with the woman, which was a “turning point” in her journey to the Lord.

Wu incorporated chemistry into the night’s lecture when she explained that when a nuclear change occurs, one atom is transformed into an entirely different element; “everything is different,” she said with a laugh when she compared her changed heart in Christ to a nuclear change.

After sharing her story, Wu summed up what God had taught and is continuing to teach her throughout her life.

In addition to encouraging students to appreciate what they have, she encouraged them, “wherever God puts you, do your best. That’s the principle I follow in my life.” Her story illustrated her tenacity, strength, and determination to do just that.

Wu made it clear that if it really was going to be her “last lecture,” she would want to sing Mozart’s “Alleluia” with students to bring the presentation to a close. Her passion for singing is evident from her involvement with her church’s Gospel choir since 2005.

Wu shared her “new dream is to serve seniors,” and with her enthusiasm to follow the dreams God places on her heart, no one doubts that she will go above and beyond in doing just that.

The next Last Lecture will take place on Thurs., November 30.