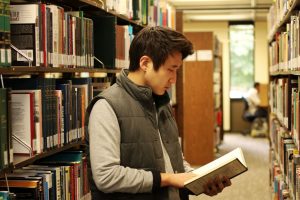 Born in Seoul, South Korea, Cho is a junior at Gachon University in South Korea, studying engineering. His love for travelling and learning other cultures has taken him to several countries in Europe and to China.

While planning his foreign exchange program in the U.S., Cho did not know much about NU.

“To be honest I did not know anything about NU before I came here. I briefly heard it was Christian college,” he said. “I had applied to go to Purdue University but chose to come to NU. I am a Christian, and I thought I could get used to this environment and community.”

Over the last seven weeks in the U.S. Cho has tried to immerse himself in the culture.  In comparison to Korea, he feels that people here are more informal.

“People are extremely informal here; in Korea we practice ‘extreme’ politeness when addressing elders,” he said. “If someone is even one year older than you, there is a level of formality accrued to that person. People here do not seem to be that polite. No matter the age. Student-professor relationship for example is strictly formal.”

One of the challenges Cho has faced while being in the U.S. is overcoming the language barrier.

“Language barrier is something big. It is what you think as a first thing, when you want to talk to someone. If there is no language barrier, we could be having fun. People tend to not talk to us and vice versa because of our limited English vocabularies,” he said.

While language barriers continue to affect how he relates with people from different cultures and background, Cho has devised a plan to overcome this barrier.

Cho enjoys spending time with friends and studying. He attends a Korean church in Seattle and loves visiting the neighboring cities like Bellevue, Redmond and Kirkland.

One thing he admires about NU is its spiritual growth.

“I have Korean friends who are not Christians who when they came to this college they started to go to church. Some of them have never stepped foot in church before. I think this is such a big spiritual growth for them,” he said.