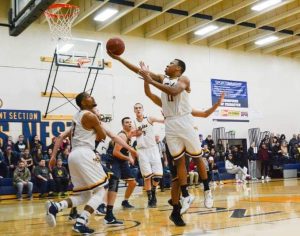 Editor’s Note: The Talon strives to provide factual reporting but understands that some language may have negative influences on its readers. For this reason, the phrase “racial epithet” is used in place of an offensive word referenced below.

John Van Dyke, Northwest University men’s basketball head coach and assistant athletic director, has been suspended with pay for the upcoming basketball season, according to several sources within the athletic department and an email from the NU president’s office.

According to Tre Benton, a senior on the basketball team, Van Dyke used a racial epithet in a team meeting before the alumni game a few weeks ago.

“Everyone was shocked and surprised about the incident and we did not know how to handle it at first,” he said. “As a team we were able to come together to find a solution on how to manage this situation best.”

According to another athlete with knowledge of the situation who did not wish to be named, Van Dyke has used the same epithet in the past in discussions with the team, but this was the first occurrence to be reported to the athletic department.

According to two sources who did not want to be named, but who have knowledge of the incident, Van Dyke used the term while describing music lyrics he wanted athletes to avoid. One source said he felt remorse about what he had said, when confronted about it later.

Assistant coach Jeff Drinkwine will serve as the interim head coach, and women’s head basketball coach Ken Crawford has been named head of basketball operations. Drinkwine brings extensive coaching experience to the job. He was head coach of NU’s Cascade Conference rival Evergreen State College, and also served on the coaching staffs of Boise State, St. Martin’s University, and Pacific Lutheran over the course of his career.

“Coach Drinkwine is a great coach and the right person to fill this position,” Benton said, adding that Drinkwine has already started working with the team.

NU President Joseph Castleberry announced that Van Dyke was suspended in an email to faculty and staff on Wednesday night.

“This change was not expected and was only taken with serious deliberation,” Castleberry said in the email. “It is borne out of our desire to make sure that our student athletes have the type of experience that we all expect them to have at Northwest University.

“Coach Van Dyke remains an employee of Northwest, and we will be in discussion with him about resuming coaching activities next season. We appreciate John’s service to NU for the past 18 years and want to give him a fair opportunity to return to his coaching role,” he said.

This story continues to develop, and The Talon will provide updates as more information becomes available.