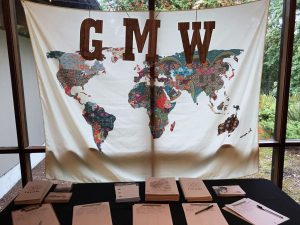 Global Missions Emphasis Week took place from October 9-13, and brought speakers, events and resources to the NU campus. Throughout the week, students were able to hear stories and testimonies from missionaries and missionary kids alike. Mission trips for summer 2018 were also announced.

Events throughout the week included a “Taste of Missions” dinner on Wednesday, visiting a Jewish Synagogue on Saturday, and a “Walk in Their Shoes” experience on Tuesday that invited students to forego shoes for a day with the intent of contemplating other culture’s norms, and finding confidence in discomfort.

Chapel speakers for the week were Joanne Ramos, the Missions Pastor at Churchome (formerly The City Church) in Kirkland, and Marcy Poehlrich, who was a missionary in Uganda for several years and continued her ministry even after losing her husband. Several representatives from Assemblies of God World Missions were also available for one-on-one sessions with students.

Brittany Basso, the student leader Global Missions Director, worked closely with other students to coordinate Missions Week. When asked what she hoped students gained from the week, Basso said, “The events and services were purposed to see ‘why’ we should do missions and the guests were here to help us learn and take the practical ‘how’ steps towards going out. Watching our campus dive all in on missions and truly take the Great Commission in Matthew 28 to heart was the biggest takeaway, and will hopefully continue to be a presence in each student’s life.”

Over the week, all of NU’s mission trips for summer 2018 were announced, and students are able to submit applications for trips they wish to take part in.

Basso also had advice for anyone debating about going on a mission trip, explaining that it is important to understand the purpose behind joining an NU mission trip.

“NU short term mission trips aim to: one, serve the missionary host; two, serve the people of the country, and most importantly; three, serve God by walking in obedience. It’s not about the trip or the place itself. It’s all about God and loving His people.”

As for NU students who feel called but are not sure where to go or what to do, her advice was to first of all, and most importantly, “pray!”

Basso explained that whether students are musically talented, good with children, athletic, or simply interested in other cultures – there is a trip fit for everyone. There are plenty of ways to get involved with Campus Ministries, Basso said, simply by stopping by the office and chatting, asking questions, and getting to know those already involved.

Sam Absten is one of several students involved in Campus Ministries, and had inspiring words for anyone considering joining a trip: “No matter what, you’re going to walk away with a new experience, one that will grow and stretch you, spiritually and mentally. Missions trips are life-changing experiences.”

Students interested in learning more can keep an eye out for a Campus Ministries open house that is tentatively planned for November.

Applications to join a 2018 summer mission trip are due November 21. To learn more, come to the Global Missions Info Night on October 25 at 7 p.m. in the Pecota Student Lounge.