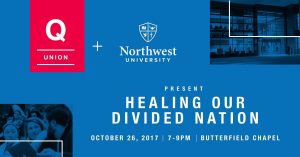 Speak up. Meet up. Listen up.

Those three imperatives construct the #UpToUS campaign, a centerpiece of the Q Union event which took place the night of October 26 in Butterfield Chapel. Northwest University served as one of the university sites for the Q Union: Healing Our Divided Nation event, organized by Q Ideas. Highlighted by a mix of national and local speakers in a TEDTalk-style format, the event united Christian students from 20 campuses across the country to “educate students on how they can bring hope and leadership to their campuses in a critical cultural moment.”

Brooks led off the night with a talk about cultivating virtue. He said that in all the cases he has studied, we do this by identifying our core sin, and then spending the rest of our life fighting to beat that core sin. The greatest virtue, he said, is humility (that, and a good relationship with your mom); the great sin of our culture, on the other hand, is narcissism and pride. He spoke to our culture’s lack of commitment and shallowness, and how as Christians we need to rebel against our culture’s narrative of individualistic consumerism.

“If the world says ‘celebrate autonomy,’ say, ‘no – I’m going to celebrate relationship,” he said.

Elizabeth Romero kicked off the Northwest side of the evening, giving her talk on “Putting a Human Face on Immigration.” She described struggles her father has faced as a naturalized US citizen, and the problem of identifying people as “other,” which makes it easy to justify excluding them.

“We have a tendency to be kind to our own kind,” she said, adding that “‘building a wall’ is just a metaphor with bricks.”

Romero noted that since one out of every 10 students at NU is from a country other than the US, this is a conversation we cannot ignore.

Student Farangis Begalieva followed Romero, speaking about the opportunities education has provided her and others in her home country, which is a Muslim-majority nation.

“Education expands our lives,” she said, “even when our traditions dictate otherwise.”

The event then reconvened on the national level for the next two speakers.

Dr. Kara Powell, of Fuller Youth Institute, spoke on the impact technology has on our relationships. She said that research has found that the mere presence of a cell phone changes the dynamic of a conversation, even if it’s just lying on the table facedown. Technology often becomes a substitute for relationships, Powell said, rather than the supplement it was meant to be.

“When I get addicted to my devices for a sense of accomplishment,” she said, “I end up with more productivity and less personhood.”

Powell suggested using love as the test for how we use technology in our conversations and relationships, asking the question “is this the most loving step I could take right now?”

Activist and hip-hop/spoken word artist Propaganda wrapped up the national portion of the event, speaking on the idea of intersectionality – how our identities relate to power. He said that we can often decry the systems of power on one hand, yet benefit from them in other areas (giving the example of his being African American, but also male). He stressed how we are actually allies in fighting against abusive power structures, rather than adversaries.

ASNU President Micah Lorenz closed out the evening speaking on shifting our perspective when it comes to community at Northwest. He said that the consumerist mentality we often have when we approach community at NU gets it backwards. He challenged to students to become hosts of the metaphorical party, rather than just consumers of it.

“When you walk in asking ‘what can they do for me?’,” Lorenz said, “you’re doing it wrong.”

Dr. Clint Bryant, an assistant professor at NU who had a big role in organizing the event behind the scenes, said he was pleased with how the event turned out in its second year on the NU campus.

“We had the benefit of seing Q [the Q Ideas organization] from a larger perspective. . . everybody keeps giving me credit, but . . . it was a great team win,” he said.

Q Ideas, the national host of the event, challenged students to get involved in the conversation and become part of the solution. Q Ideas founder Gabe Lyons said that the healing of the divide in our nation is ultimately up to us. Find out more about the #UpToUs campaign at uptousnow.com, or about Q Ideas at qideas.org.