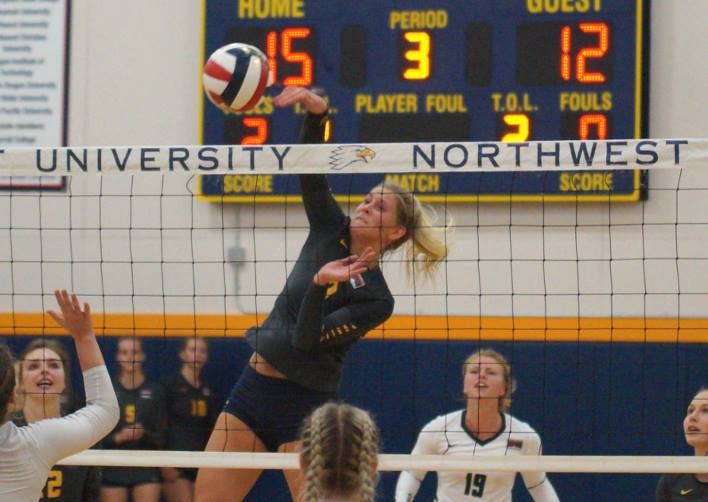 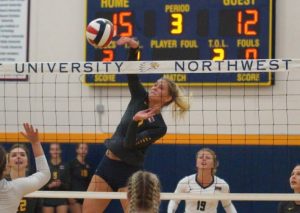 The Northwest University women’s fall sports teams are preparing for post-season games and meets. On all teams, the lady Eagles are improving and looking forward to Conference Championships, with their sights set on Nationals.

The women’s volleyball team has a season record of 15-6 and a Cascade Collegiate Conference record of 9-4. After the most recent NAIA poll, the Eagles are ranked 27th in the nation.

With preseason trips to California and Montana, the team was prepared for tough matches against other conference teams. As is reflected by their winning record, the team dedicates themselves to improving every week. Head coach Steven Bain is very impressed with the team he works with.

“All the teams I have coached at NU have worked hard and the standards increase every year. But this group, more than any other, has done it for a longer period of time and at a consistently high level,” Bain said.

With the upcoming Conference Championships, the Eagles will focus on preparing well, supporting one another, and continuing their mindset of growth and effort.

The women’s soccer team has a season record of 7-6 and a Cascade Collegiate Conference record of 4-3. After last year’s successful trip to the NAIA Final Four, the team struggled to score in the first few games this year. They started the season with a 1-3 record, but have been gaining momentum ever since.

After adding eight new girls to an already strong roster, the team hopes to continue improving through the remainder of the season. Their improvement was evident in their game against Southern Oregon on Oct. 13. In a span of four minutes, two goals were scored by junior Jaclyn Metz and senior Winter Wirkkala.

“I am very confident in this team and look forward to seeing them put it all together down the stretch,” Chud said.

After a rough start to the season due to injuries early on, the women’s cross country team was ranked 28th in a recent NAIA poll. With top runners now recovering from injuries, the team hopes to better their rankings in upcoming races.

The Cascade Collegiate Conference Championship meet is this weekend, and the team hopes to qualify for Nationals from that meet. Head coach Mark Mandi is confident that his team will execute well and advance to Nationals.