Commentary: Intramural Flag Football, Where Everybody Graduates a Winner 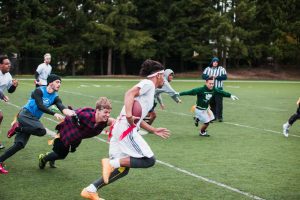 The FOA Flannimals soundly beat the 600 Pride 50-20 at the Northwest University Intramural Flag Football Championship on Sat., Nov. 11, putting yet another undefeated FOA season in the books. There was a lot of buzz surrounding the game; the Pride had an athletic team that stacked up well against the reigning Flannimal juggernaut. Their lineman squad was a penetrating threat to any offensive line, and their offensive was led by Daniel Cresta, a deadly quarterback with a strong cadre of receivers to choose from.

Riddled with injuries and illness leading up to the game, the Pride came to the game missing many players. The Pride had only two subs to pull from the bench, leaving those players who were on the field exhausted without a fresh roster to fall back on.

FOA, on the other hand, showed up ready to play with a roster several layers deep. Most of their threats were geared up and ready to take on the supposedly-stacked underdog. The two teams went toe-to-toe for the first few consecutive drives, hinting at the way the game should have gone.

A blitz by FOA’s Ryan Carter got through 600’s line early on and stripped the ball, allowing FOA to quickly reverse 600’s momentum and snag a touchdown.

By halftime, it was clear how the game would end. By the end of the second half, both teams were just playing to have a good time. The Flannimals started trying out improvised trick plays just for the fun of it, even scoring on an unexpected backward lateral by Zac Price. The Pride’s linemen began initiating every play by gesturing to the sky and bellowing a war cry before the snap: “For Him! For Him! For Him!” The game ended with a questionable kickoff return for a touchdown by FOA, but it stopped being about the score long before that. Both teams met, hugged, shook hands and cheered with their fans. It wasn’t the game they had hoped for, but in the end, it was just a flag football game, and it was great to be playing together.

Northwest’s intramural flag football program has been something I’ve enjoyed since I transferred here with my wife in 2016. I signed up to participate as soon as I learned about the upcoming flag football season, and was told that because I lived in the FIRS that I would automatically be put into the FOA team. I didn’t know what that meant, but I didn’t really care either; I just showed up to play football, meet new people and burn off some steam. I played hard, got a sack, got turf-burn on my leg and eventually FOA won. I went home satisfied, favoring my tender knee and knowing that my effort had helped propel our team to victory.

We won the next week after that too.

And the week after that.

And the week after that.

The more games I showed up to, the more I began to realize that something was up. Many of my teammates were as old or older than me at 23. Most of them were juniors or seniors. There were also a number of military veterans on the team. I was slowly beginning to realize something that I later learned every other player apparently already knew; FOA won because FOA was stacked.

I didn’t fully grasp how dominant FOA had been in recent years until later in the 2016 season when something unbelievable happened: FOA lost a game.

I was one of the six FOA players who was able to make it to that game. We played a hungry 300 Wolfpack who had apparently been preparing to take us on all semester. Missing many of our key players, the Wolfpack defeated us in a good, tough game. After the game ended, the Wolfpack was celebrating like crazy, and a few of my teammates were really bummed out. I didn’t really understand the vibe until I asked a few people and learned that this wasn’t just a loss for FOA…this was the only loss FOA had been served in years.

This was the first time I realized the system needed to change. Now, with yet another FOA championship year in the books, I think now is a good time to have this discussion; FOA’s consistent dominance of the flag football league is something that needs to be addressed. The Flannimals are an unfairly strong team for a number of reasons that I don’t foresee stopping any time soon.

First off, the Flannimals tend to be older than most of their opponents. FOA is composed of FIRS married housing students, off-campus students and apartment students. The average age that people get married in the US is 28.2, and although it could be argued that this statistic isn’t an accurate reflection of the average age of marriage at NU, it’s fair to say that the average married student at NU is older than the average unmarried student in the dorms. Additionally, because of the university’s placement policy for student apartments, students in the student apartments also tend to be older than the average student living in the dorms.

Why does age matter? It’s a matter of biology. Though women are welcome to participate, the majority of every team’s roster is men. The male body can continue to develop until age 21. This means that many of the younger dorm students are still developing physically, while many of the older FOA students are either fully developed or nearing full development, putting FOA at a general developmental advantage. There are always exceptions to the rule, but in general, the FOA team is statistically more likely to have an athletic edge over their younger opponents in almost every game.

The Flannimals also have the advantage of experience. Though FOA’s team composition tends to change each year because of graduation, the talent level of the team never really disappears; as players get older and more experienced, their housing situations also tends to change, eventually bubbling their way up to FOA. Because of this, each year FOA’s roster is usually replenished with experienced students, while the dorm floors tend to be replenished with less experienced students.

There are seasons upon seasons of results that illustrate FOA’s consistent dominance in flag football. FOA’s team has been so unstoppable in recent history that I had to do some digging to even find somebody who remembered the last time FOA lost a championship game. Treavor Copeland, an NU alumni who now works in the IT Department, told me that while he was a student at NU from 2010-2014, he could only recall one time that FOA lost a championship game: 200 (then called the Zoo) defeated FOA in 2011, Copeland’s sophomore year.

Copeland also pointed out that FOA was split into two teams during that time, with FIRS and apartments students on one team and off campus students on another. During this time, these two teams were often the teams that met in the championship games. The fact that those championship games were fought between the two sides of what would eventually become one FOA team is an obvious indicator of FOA’s flag football power. Copeland believed that the combination of those two teams in 2014 has made the Flannimals an unquestionable powerhouse in the NU flag football scene.

One might think that the secret to the Flannimal’s consistent success is hard work, practice, and athletic training. This is absolutely not the case. Every Saturday morning, the Flannimals show up with the same plan: pass. That’s it. They will pull out an occasional run play, but details like what routes to run, who is running what route, or even who is playing on the line, is often decided at the very last moment. The linemen do the same thing, blocking the same way on almost every play. It doesn’t matter though, since this strategy has somehow won them seven of the last eight championship games.

Compare that to other teams in recent years. This season, the Pride prepared for weekend games by lifting weights and practicing together throughout the week. The 500 Ducks and Chicks and the 200 Jungle also had regular practices. Last season, the Wolfpack and the 100 Hood even scouted a few of the Flannimal’s games.

FOA obviously has a number of advantages over their opponents that are systemic in nature. I don’t think that the Flannimals are invincible, but I think the stars would have to align for anybody to beat them.

You never know, though. This year marks the end of Cole Hastie’s FOA career, a career characterized by four back-to-back championship wins. There are a number of graduating FOA players leaving with him: Austin Johnson, Micah Lorenz, Alex Brotnov, Zac Price, Zach Foote, Ryan Carter, James Perez, and myself to name a few. As mentioned before though, other experienced students will likely fill in those vacancies without an issue.

It seems clear to me that this system needs some reform. I highly doubt that whoever implemented a recreational intramural sport system into the university intended for there to be one powerhouse team that regularly stomped on all the other teams. Most solutions I have discussed with peers have had holes in them that I don’t know how to fix.

What I do know is that most students are craving a change. Most of the students I have discussed this topic with have expressed an understandable frustration at the way the system works now. Some have suggested allowing students to simply create their own flag football teams independent of floor boundaries like many other colleges and universities do. Others have suggested having some kind of draft. My favorite suggestion I’ve heard put forward is having some kind of knowledgeable third party distribute FOA’s players as fairly as possible into the dormitory teams, padding the younger floors with more experienced players to create a more even playing field.

One thing is for sure, however. If nothing changes, it is likely that the Northwest intramural flag football league will continue to be the sport where everybody graduates a winner.

Christmas Pursuit Wraps Up the Semester with Community and Celebration