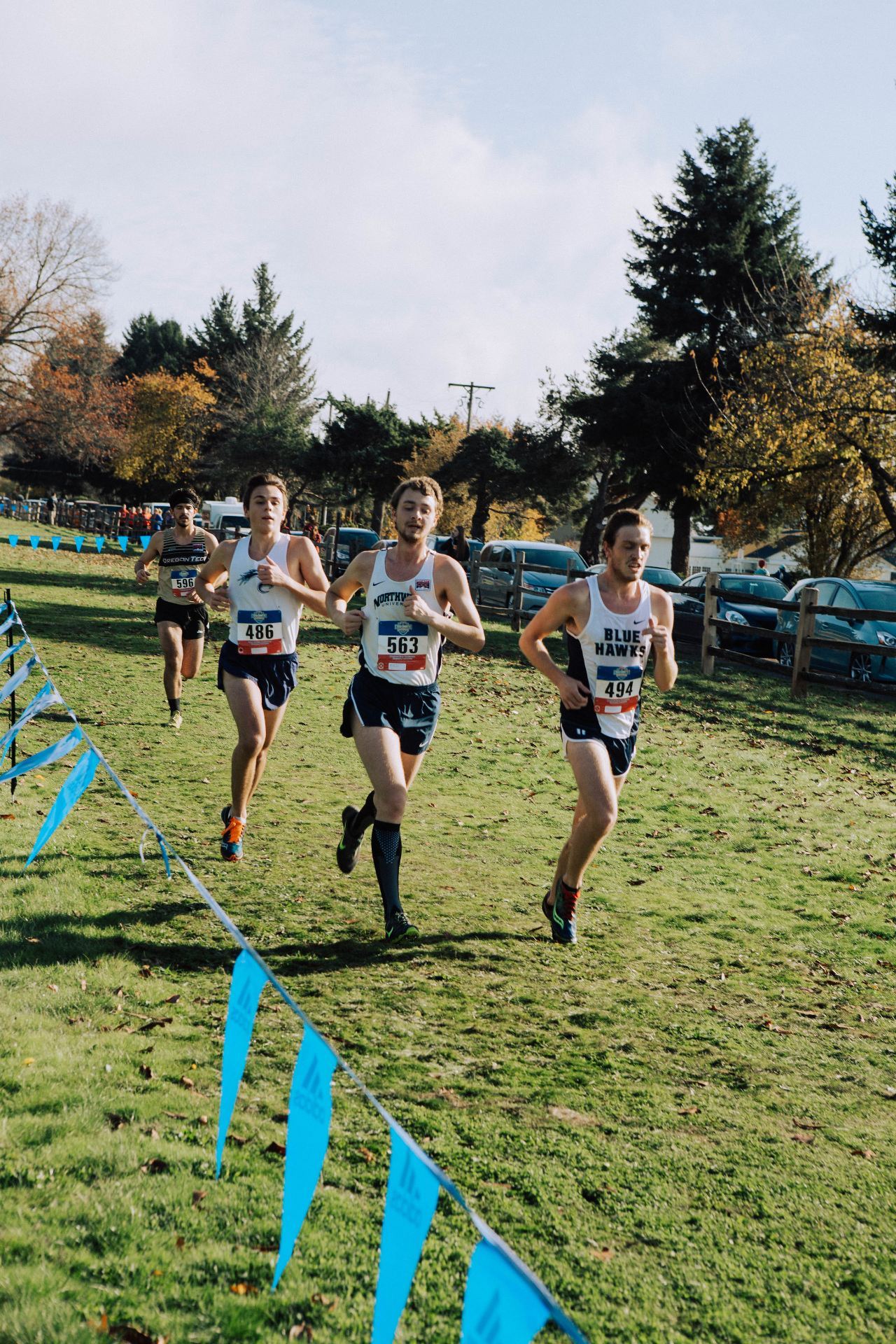 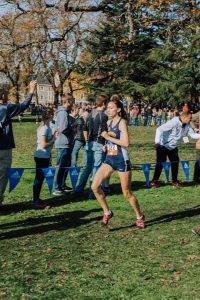 Lilly Engelbrekt led the Eagles with a 56th-place finish. Photo by Tyrell Bonner 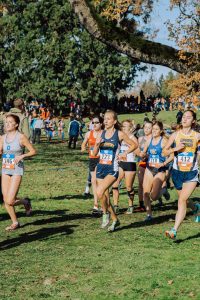 By: Riley Sine and Cassidy Brown

Editor’s Note: The following is a first-person recount of the 2017 NAIA Cross Country Championship by Talon writers and NUXC athletes Riley Sine and Cassidy Brown.

Riley: At 6:30, the alarm goes off. Problem is, I’ve been more or less awake for the last half-hour, as is typical on race days. Apparently, a decent night’s sleep before a race is too much to ask. Dragging myself out of bed, I get dressed for our shakeout, a light 15-minute run to loosen up the legs and help dispel some of the nerves. Thus begins our pre-race ritual, as we’ve done for every meet. This pattern, first established each August, is used to focus our minds on the familiar motions of race preparation – as opposed to the fact that we’re about to run on the biggest stage of our lives. . .

Cassidy: My heartbeat booms in the dimly lit hotel room. I slowly sit up and look around, my eyes resting on the shoes that sit in the corner. In my career as a collegiate athlete, I have spent many Saturdays waking up in unfamiliar hotel rooms, with the nerves of an impending race fluttering about my stomach. But this Saturday morning is uniquely sentimental. It’s the NAIA National Cross Country Meet, and the last cross country race of my collegiate career.  I am nervous, excited, and ready to fight. It’s race day.

Riley: Still not entirely awake as the elevator hits the hotel lobby, I meet the rest of my teammates for our merry little pre-race jog. The events which have conspired to bring us here are nothing less than miraculous. Before the Cascade Conference Championship meet, I had said as much would be required if we were to reach this final race. Speaking to the parents of one of our teammates, I’d said that while the women’s team was as close to a lock as you can get in cross country, the men’s team wasn’t so fortunate.

“We can do it,” I’d said, “but the stars have to align.” And align they did. Because our conference was hosting the NAIA meet, one additional team on both the men’s and women’s side would be granted an invitation to the big dance. With five teams in the conference ranked in the Top 25 on the men’s side, we figured that six teams would qualify. That meant that all we had to do to become the first men’s team in NUXC history to qualify for Nationals was beat the Corban Warriors. The only problem with that is, no one on the team can remember a time when we’ve beat Corban in a race. Ever.  But beat them we did, and we punched our tickets to Vancouver.

Cassidy: It’s a uniquely pleasant November day, and the sun shines brilliantly as we spend the morning preparing for the race. Once arriving at the course, my teammates and I gather together to begin our warmup. I take a few moments to absorb just how meaningful it is to have a full team of girls standing at my side. In previous years, I had ran at the cross country National meet only as an individual. This is the first time I will get to race with all my teammates around me, and nothing is more motivating than that.

Riley: Driving over to the course, we’re struck by how pristine the weather is. The first rule of cross country is that the weather never plays nice, particularly in the Pacific Northwest. Yet as we exit the van, we are greeted by clear skies and a moderately warm morning. Beginning our warm-up, we marvel at the fortunate turn of events. As we report to the starting box, Daft Punk’s “Get Lucky” blares through the loudspeakers. Not my idea of pre-race jams, but it’ll have to do. Once again, I’m blown away by what has transpired to bring us here, standing on the banks of the Columbia with the best of the NAIA. We join our 350-odd fellow competitors at the line, and await the starter’s call.

The gun goes off, and 8,000 meters of trial by fire begins. As is our habit, we sprint off the starting line, vying for good position in the pack. As I begin settling into pace, I notice there are a few dozen more jerseys in my immediate vicinity than planned, but decide not to worry about it. The pack begins to close ranks as the course narrows, and I try to move up.

About halfway through the race, I can tell I’m in for a long day. I’m nowhere near where I wanted to be in the race, and my pace seems to have slowed a bit. To top it all off, the negative voices that run through the mind every race seem to have been dialed to 11 today, matched only by the reports of pain coming from my legs. I grit my teeth for the fight I know is about to begin, and try to claw my way forward in the pack. The uneven terrain of the course has taken its toll, however, and I’m unable to summon the second-half surge that’s become my calling card. The last two laps of the 2-kilometer course are a journey through the “dark night of the soul,” and I reach the finish line far latter than I would have liked to. 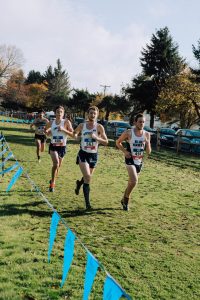 The clock reads 25:52, good enough for 57th place. A year ago, I’d have been thrilled to have seen that number on the finishing clock under any circumstances. This season, however, it ranks as my second-slowest effort, and I’d run seven seconds faster two weeks prior at the Conference meet, 2,700ft above sea level no less. To say I’m disappointed in myself would be putting it mildly, but I try to push that out of my mind as I turn back to see my teammates come across the finish.

No one looks like they’re enjoying themselves as they cross the line. Granted, an 8k cross country race doesn’t fit within very many peoples’ definitions of fun, but even for runners, we look thrashed. This course has proven itself to be a grinder, despite first impressions. Most of the NU men come away feeling that today wasn’t their best day. Senior Brian Guisinger proves the exception; he has a red-letter day, finishing in the top 5 and scoring points for the first time all season, ending his collegiate cross country career with a bang.

Cassidy: Our warmup routine flies by in a blur of nerves and excitement. The men’s team has finished their race already; now it’s our turn. As we run the last of our strides, I’m overwhelmed with emotion. This is my last cross country race ever. I’ve spent twelve years of my life dedicated to this sport, and it was all coming to a close. My eyes fill with tears as I do one last stride. My spikes dig into the ground, my legs are awake, and my heart is full.

We toe the line, and a silence sets in. All 300 of us are waiting for the gun to fire, for the race to start. We take our last breaths, set ourselves into our starting stances, and BANG.

Immediately, over 300 bodies close in around me. This being my third cross country National meet, I know I have to get out hard. I can’t settle early, or else I’ll be engulfed by the masses. I keep a constant eye on teammates Lily [Engelbrekt] and Sarah [Estabrook], my two training partners, tracking behind them. We get caught in a stampede. Girls are everywhere, fans are cheering loudly, and the sound of my own breathing echoes in my mind.

We roll around the course, and the miles pass by in haze and pain. The end is coming, but it can’t come fast enough. My legs are aching, my breathing is raspy, and everything within me is screaming to stop. There’s only a short ways left, but it’s up a hill. Just when I think I won’t make it to that finish line, my coach’s voice comes from the crowds. Despite three injuries during my time at Northwest, he never gave up on me. And in the last moments of my final cross country race, he knew just what I needed to hear.

“Cassidy Brown, you are running awesome! This hill is yours! Come on, Cass! They’re all lined up for you to pass!”

That was all I needed. With a surge that took every ounce of energy I had left, I crest the hill and move to the finish. The finish line is there, right in front of me. 20 more meters. The pain is overwhelming. Ten more meters. Five more. One last step. Finished. Over.

Riley: When the results come back, we see “Northwest” in 33rd. Not quite what we were hoping, but not bad for the first NU men’s team ever to run at this meet. Though many of us felt that we could have done better, we learned a lot from the experience, and believe that our future seasons will be better because of it. There was a lot to celebrate this season, and while not everything went right, quite a bit did, in ways none of us could have predicted.

Cassidy:  When the scoring was finished, we found out that our women’s team placed 25th. We had finished as a nationally ranked team, and that was what we had set out to do. The season was a wonderful one. It was full of ups and down: hardships for a few and excitements for many. It was bittersweet to come to the end of such an amazing season, but we had a whole team compete, many fans cheering us on, coaches who encouraged us unrelentingly along the way, and the memories of a lifetime. We raced at the National meet, and nothing could have been better than that.

Christmas Pursuit Wraps Up the Semester with Community and Celebration