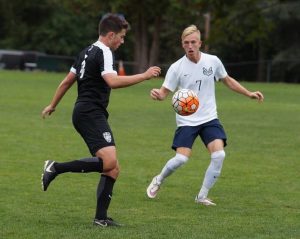 The women’s volleyball team finished their season in a historical manner at the NAIA National Tournament, becoming the first time NU volleyball team to ever competed on the national stage. Despite so much success on the court, head coach Steve Bain was most proud of his team for how they dedicated themselves to becoming better throughout the season.

“The highlight was simply watching this team grow and improve week to week over the course of the entire season,” Bain said.

The team proved that they could compete at the National level. Throughout the National tournament, the only teams that beat NU would advance to the Final Four. The team hopes to use what they learned this year to better themselves in following years.

“In order to be successful, we must be able to treat each match we play as a championship opportunity, regardless of the opponent or the match conditions” Bain said. “If we can do that, then the results will take care of themselves.”

The men’s soccer team finished their season with a sixth place Conference finish and a spot in the Conference playoffs. Because of a variety of injuries and setbacks, the season did not go as originally anticipated.

“We had hoped to finish in the top three, but the team was faced with some obstacles that we had to overcome,” head coach, Gary McIntosh, said. “Finishing where we did was a huge accomplishment.”

The trip the team took to Montana earlier in the season demonstrated their hard work and competitive nature. Despite long and tiring travel times, the team won two games during the trip, which helped them secure their spot in the playoffs. McIntosh said he was proud of how his team finished in light of the season’s setbacks.

“To have the opportunity to coach these young men and mentor them is a privilege and an honor,” McIntosh said. “These athletes give me everything that I ask of them, and I ask for a lot. I’m proud of what this team has accomplished.”

For the second year in a row, the women’s soccer team ended their season by playing in the National tournament. Although they lost in the first round, they overcame a season that got off to a rough start and played their way back to the National arena. Head Coach Bryan Chud said he was proud of how his team fought through their season.

“To come through adversity and the challenges we did and still go to Nationals at the end of it was pretty amazing to watch and be a part of,” Chud said.

Despite having a variety of proven goalscorers on the team, they struggled to score throughout the season. Chud predicts that his team will overcome this adversity by using the off-season to train hard, work on finishing drills, and gain confidence. Because most of the players are returning next season, Chud is excited for what is to come and sees a bright future for the program.

“I am very proud of this team and look forward to returning all but three of them next year,” Chud said.

“It was the first time that the men’s team qualified, and the first time for the women since 2004,” head coach Mark Mandi said. “It’s really a testament to God’s grace, and I wouldn’t want it any other way.”

With seven seniors graduating this spring, the teams will look a little different next year. The young group is hardworking and dedicated, so Mandi expects the team to fill the graduating shoes and rise to the challenge.

“[The seniors] have all added so much to the program, and I am really grateful for them,” Mandi said. “I think we can have a strong track season where our seniors help develop the future leaders of this team.”

After taking a short break from training, the teams are now preparing for the upcoming indoor and outdoor track seasons. They hope to carry the momentum built by competing at the National meet through the remainder of the year.