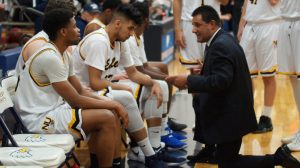 By Riley Sine and Tre Benton

Drinkwine has been an assistant at NU for the past three seasons, and has been on coaching staffs at all three divisions of NCAA basketball prior to his new role, along with a stint as head coach of Cascade Conference rival Evergreen State.

“My goal while coaching is to make my players the best that they can be on and off the court. I want them to grow up and be more successful than I am,” Drinkwine said.

Confidence in Drinkwine has been expressed throughout the athletic department by both players and administration.

“Jeff has a deep understanding for the game of basketball and has had extensive coaching experience that will help him as he takes over the program. He definitely has a love for the game, but I think most importantly, he cares about the players and helping them find success on and off the court. I’m excited to see Jeff takes the basketball program forward,” said NU athletics director Gary McIntosh, in a statement announcing Drinkwine’s appointment.

“He is a great coach,” said redshirt-junior guard Daniel Ghebremichael. “There are times in practice that he would get on me about making certain mistakes, but then off the court we can talk about life and other things that are going on besides basketball.”

Drinkwine took over leadership responsibilities of the team on an interim basis after the suspension of long-time head coach John Van Dyke. Van Dyke announced his resignation over the Christmas break, after nearly 20 years at the helm of Eagles basketball.

Coach Drinkwine and the Eagles return to action this weekend with a Cascade Conference doubleheader. The Eagles take on the Beacons of Northwest Christian on Friday night in the Pavilion, then host the Corban Warriors on Saturday.