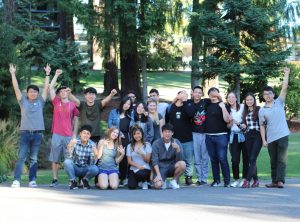 “Building this program was the launch of my dreams,” Witt said.

An NU alum, Witt’s enthusiasm for working with international students began when she was an undergraduate student and became a conversation buddy for a student from Japan. The relationship became a catalyst for her desire to live and study abroad. After graduating from NU, she joined the Japan Exchange and Teaching (JET) Program and lived in Japan for three years.

Witt returned to the U.S. and obtained her master’s and later her Ph.D. It was at a conference where Witt was speaking that she was reconnected with her former professor. While speaking to her professor, Witt found out that the program that ignited her passion to study abroad was in need of restoration. Witt began working alongside her former professor and redesigned the program while she was finishing her Ph.D. for two years. After finishing her Ph.D. and helping redesign the ESL program, Witt was offered a job at NU to launch this new program.

“Coming to Northwest was an answered prayer and truly a dream come true,” Witt said.

The new CELE program was launched in 2010 with only a handful of students and has expanded significantly since then.

Witt said her vision for the CELE program is much greater than creating a place to help international students learn English to prepare them for college courses. The program is designed to be a space for people to have the opportunity to explore different cultures, embrace cultural differences and connect with students from other countries.

“I’ve always wanted this program to be place that taught language for students who were coming from other countries and to [also] be a real tool for the whole campus,” Witt said.

The program has achieved its goals of becoming a place for people with an interest about other cultures to connect and both NU and international students benefit greatly from their involvement.

Student Margie Merino, a junior, has been a conversation buddy every semester.

“I love just being a part of a community and making friends from different countries,” Merino said.

International student Qinqyi Shangyan loved the opportunity to have a conversation buddy to be able to practice her English as well as make new friends.

Witt said that involvement with international students is not a massive time commitment, however, she said it is a very worthwhile one.

“It doesn’t take [very] much out of your time just to be friends [with] someone,” Witt said.