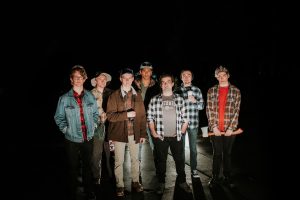 Seven young men were nominated by their respective floors to compete in the pageant, which includes competitions in talent, interview, formal wear, and choreographed dance.

The theme for this year’s event is Survivor, themed loosely around the show of the same name. NU’s Student Activities Board (SAB) put a Pacific Northwest twist on it.

NU’s Director of Community Life, Larissa Lilly, talked about the thought process behind choosing the theme.

For some of the contestants, their nomination was expected. For others, it was a shock,  and some had no idea the event even existed.

Engler, a freshman, said he volunteered due to no one else on his floor wanting to participate.

“I had no idea what it was so I just kind of just did it last minute,” Engler said.

In contrast, Kolby wasn’t surprised when his nomination was announced.

“My floor had been talking about me doing it for a while, so I was just like, yes.” Kolby said.

Kerswill had been anticipating his nomination as well, yet said he still has mixed feelings about participating, judging from his experience of being an audience member for previous pageants.

Mikaele, a freshman, recalled fellow students suggesting his nomination for Mr. Northwest before he even knew the event existed.

“First week into school [people] are like ‘Dude you need to be Mr. Northwest’ and I’m like I don’t even know what that is. I thought they were going to forget, but here I am now,” Mikaele said.

Faley said he is already enjoying being a part of this competition.

“I just feel excited. I got nominated by the floor and was like wow, this is great, I’m just loving it,” Faley said.

Vinje and Kerswill both talked about their excitement to bring honor to their respective floors.

Most of the nominees concluded that competing in the talent portion excites them the most, promising a great show.

“For an event specifically [that I’m excited about] I guess talent, sounds pretty cool.” Dall said.

Kerswill is also eager to be participating in the talent competition this year, having enjoyed watching it last year.

“I’m excited for just representing the floor and the talent portion, to see people’s reactions to different talents and just the surprise of it,” Kerswill said.

Mikaele and Faley both spoke about their enthusiasm for being a part of one of NU’s most popular events.

“I’ve heard that this is a really big thing on campus, so being a part of it is something that I’m excited for, and the talent portion, like cannot wait,” Mikaele said.

Faley said this is going to be his first experience with a competition of this kind.

“Everything sounds amazing, it’s like wow I’m going to be part of something great… I’ve never done this before,” Faley said.

Vinje is looking forward to the process of the competition itself as well as the friendships to be built with his fellow contestants.

As for Engler, he’s ready to take on whatever being a Mr. Northwest nominee throws his way.

“Really everything sounds fun…I’m game for whatever,” Engler said.

Rehearsals will be held with the contestants throughout the entire week preceding the event, culminating on Thursday night with the pageant itself.

Lilly explained the schedule of events of the night where students will get to see the contestants compete for the first time.

“Throughout the night, [they] will be doing a choreographed dance, a talent, and two prompted questions, like interview questions, and they’ll have different outfit changes for that,” she said.

Lilly said each contestant will compete in formal wear as well, and that will be another choreographed number.

The competition will be held at 8:00 p.m. in Butterfield chapel.

UW Ph.D. Candidate Lectures on the Possibility of Life Forms on Other Planets