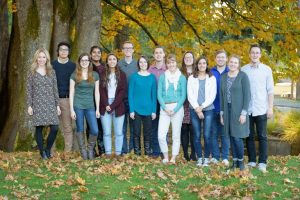 Funding proposals from the Chess Club and the International Student Club were approved and several planned or ongoing projects were discussed at last Tuesday’s ASNU senate meeting.

Student Body Vice President, Alex Lee, spoke on behalf of the International Student Club, requesting $850 to fund an International New Year event. The funding request was approved by the senate.

“I think this is a perfectly worthy use of $850, and I think [the International Student Club] can use it very wisely,” Senior Class senator Leah Johnson said.

The international-themed event will be held Monday, Feb. 12 at 3:30 p.m. in the Pecota building as an official school event, and will feature intercultural games, food, and a Chinese line dance.

Additionally, Ben Mukumbya spoke on behalf of the Chess Club, requesting $100 to fund a chess tournament to be held by the end of February in HSC 102. The Chess Club plans to hold a tournament once a month. The senate approved the funding request for the first tournament and asked for another request to be presented if further funding for subsequent tournaments is required.

During the meeting, the senate also discussed several projects in progress. New water bottle filling stations are planned to be installed in several locations around campus, including HSC, Barton, Ness, Pecota, the Pavilion, Gray/Beatty, and Perks. Some of the buildings can expect to see the upgrade very soon, but the dorms will have to wait until the summer.

The cost of installing the filling stations, which involves modifying existing plumbing, is estimated at about $14,000-$15,000 has already been set aside for the project.

The possibility of implementing fitness classes at the Eagle Fitness Center was also considered.

“We’re looking into trying to do Zumba, or aerobics, or something like that,” Freshman Class senator Tate Kuykendall said.

Several senators expressed concern about pursuing fitness classes due to resistance from administration in the past.

“I guess [senate] tried once, and they got a ton of backlash from administration about it being yoga,” Kuykendall said.

The senate has decided to continue to explore the idea, but to tread lightly around the term “yoga.”

Other projects that were addressed include purchasing new outdoor picnic tables for several locations around campus such as the Green, Pecota, HSC, and the student apartments, and increasing the frequency of therapy dog visits to once per month from twice per semester. Therapy dog visits may be further increased to once per week depending on student feedback.

UW Ph.D. Candidate Lectures on the Possibility of Life Forms on Other Planets