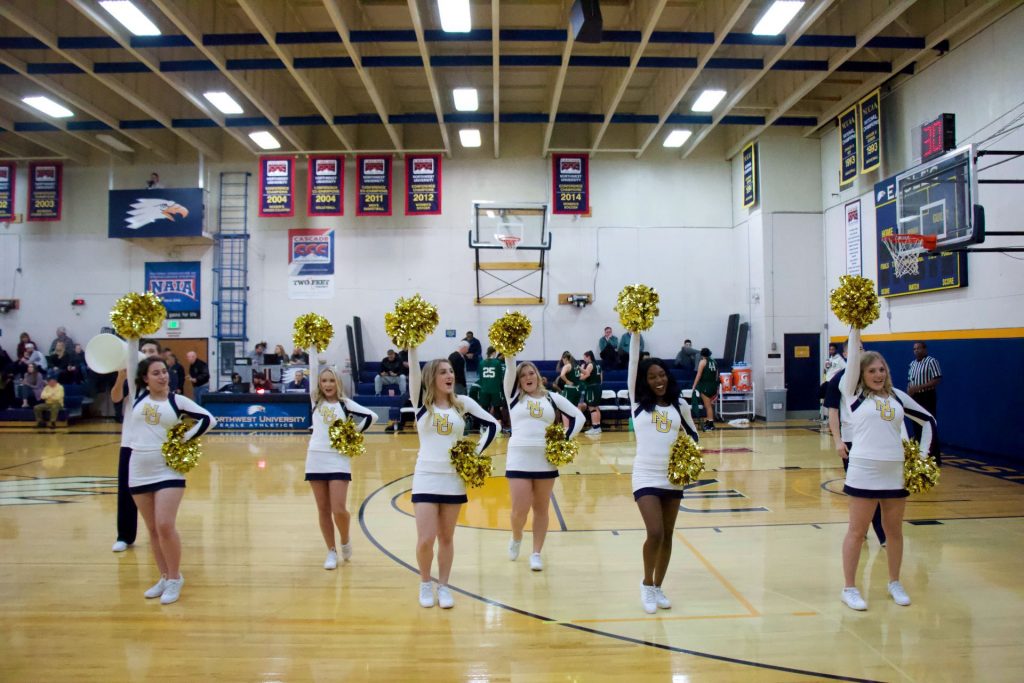 Northwest University recently became the first private Christian university in the Cascade Collegiate Conference to have a cheerleading team. The team of 13 students performed cheer routines during each timeout of the men’s and women’s games.

Larissa Lilly, Director of Community Life is the coach of the cheer squad, the first of its kind since the 1980s.

Lilly said she was pleased when she met student Hannah Brewster, a freshman, while on a campus tour and discovered her interest in a cheer program at NU.

“I told [Brewster] ‘don’t let Northwest not having a team stop you from coming because when I was a freshman in college I started my own college cheer team. You can do the same, and I would help her do it,’” Lilly said.

After an interest meeting attended by about 30 NU students and a meeting with the president’s cabinet to discuss a budget for the team, the club was approved and the tryouts began.

Lilly said that having a cheerleading team to perform at games should not to be confused with a dance team.

“Cheerleading’s primary function is not dancing. It is to lead the crowd in cheers and provide excitements at games for our sports teams, specifically basketball. It’s a choreographed dance but what we call pomp dances are simply a 16 count dance that’s repeated over and over again,” Lilly said.

Brewster, who was appointed team captain, had a heart for cheer since she was six and expressed her excitement for being able to continue in her passion at the collegiate level.

“What I love the most is the ability for me to be active but also to be able to be an encouragement toward other people in what they do and love to do. We [are] able to cheer for the girls and guys basketball team and that’s huge for me because we’ve gotten a lot of feedback of how we’ve been encouraging them and the difference that we’ve made for them,” Brewster said.

One of the two men on the cheer team, Johnathan Larson, said he wasn’t expecting to have so much fun in cheerleading until he joined the team. 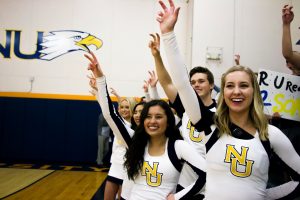 “It’s awesome, I never thought I would ever be a cheerleader in my life…I started out thinking, ‘I am a guy cheerleader,’ [and] kind of thinking it’s weird but now I love it,” Larson said.

The team practices twice a week at 6:00 a.m. and have performances that can go up to four hours.

“They have a really good attitude, they want to practice more,” Lilly said.

With the club flourishing, the requirements for new members are flexible for the tryouts next year, which are scheduled in September.

Lilly encourages students with or without experiences in cheerleading to come try out.

“As we look to move on, it will probably be more girls especially [who have] cheer background. Obviously, they have to be coordinated, timely, and have a coachable spirit. Don’t be scared though even if you don’t have cheerleading background, people can always tryout,” Lilly said.