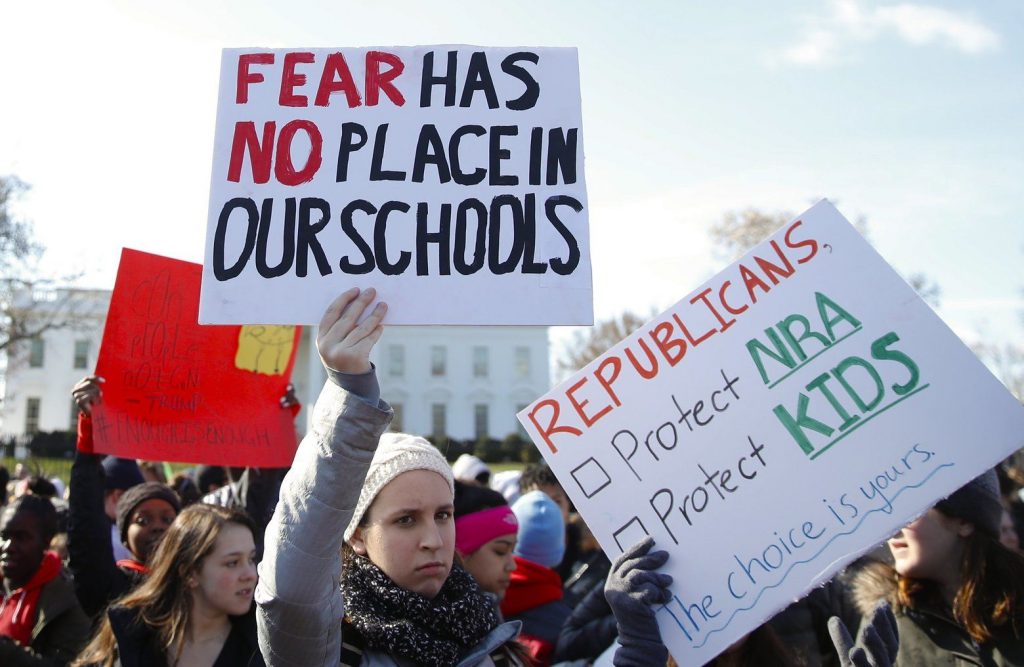 At 10 a.m. yesterday morning, high school students across the country walked out of class for 17 minutes. That number was chosen to honor the 17 victims of the Parkland, Fl. shooting, but the students were also protesting the inactivity of government officials regarding the gun control debate.

The #NeverAgain movement, which started in the days after the shooting, has only gained momentum in the past month. Students have spoken with state and national leaders, which led to the Florida governor signing a bill which raised the minimum age to purchase a firearm in the state to 21 into law. Though progress has not been as quick to come on the national level, yesterday shows that these students aren’t slowing down.

It’s a moment and a movement that a lot of Americans like. And, if I’m being honest, it’s one that I like. Seeing high school students actively engaged in civil discourse and refusing to accept things as they are gives hope to this journalist’s cynical heart. While their voices and their actions have already brought about more change in a conversation that struggles to move an inch a decade, I struggle to maintain optimism about the prospects of long-term change.

While teenagers took to the streets and social media to demand that something be done to ensure their safety, the adults were busy taking shots of their own. Conservatives and liberals were quick to use both the shooting and the unprecedented student response to score political points for their own agendas.  In some ways, it was the same broken record that plays after a mass shooting.

However, there are reasons that keep my hope alive. To begin, the amount of discussion regarding practical steps that can be taken is, at least as far as I can remember in the 20 years and change that I’ve walked this earth, completely unprecedented. Whether it has to do with raising age limits, or banning certain weapon types or modifications, there seems to be a much bigger focus on what can be done here and now to prevent another shooting. Combine that with these students’ refusal to be silent and their determination to hold the powerful accountable for their actions. This time just feels different.

There is a lot of ground that needed to be covered. Both sides need to take a long look in the mirror, and realize that they will have to come to some sort of compromise. Conservatives need to realize that talks of gun control don’t automatically mean that the government is coming for all their firearms, and liberals need to realize that people who argue that guns aren’t the only problem do have a point. We live in a fallen world, and in that sense, guns are only a means by which the symptoms of a deeper disease manifest themselves.

As far as what steps need to be taken, I think everyone is going to have to come to terms with some form of an assault weapons ban. For better or worse, these types of rifles have shown themselves to be extremely efficient as tools for conducting a mass shooting. I have to question why civilians need to possess a style of gun that was explicitly designed for military purposes. The Second Amendment to the U.S. Constitution protects the right of citizens to keep and bear arms. No one is disputing that. However, it also stipulates that this right is for the purpose of enabling a well-regulated militia. This would imply regular training and drilling on the proper use of military-style weapons. Without this training and the purpose it serves, there is no reason for a civilian to own an assault rifle. The self-defense argument doesn’t work because even if you discount handguns, shotguns are just as effective in the close-quarters environment of defending one’s home.

If that proposal is a betrayal of my conservative upbringing, then so be it. I refuse to accept that these mass shootings are somehow okay, normal, or a necessary evil. While I readily affirm the notion that guns don’t kill people, people do, I also believe that we have every obligation to prevent said killing if we can. If nothing else, my moral compass as a Christian demands that I stand with the Parkland students and say, “Never again.”