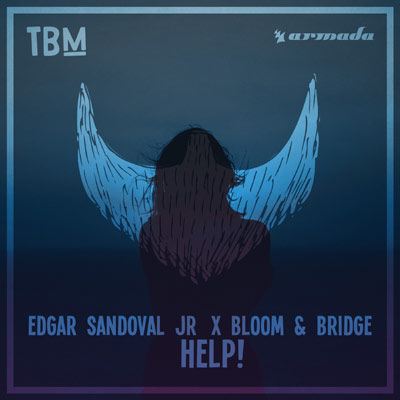 NU student Edgar Sandoval Jr has been on the come up in the music industry for a while, that much is nothing new. However, the multi-talented recording artist has been stepping up his game recently by coming out of independency and moving toward releasing on record labels.

Sandoval had his first label release (“Paradise” via PM Recordings) back in June and followed it up in November with “Places” on Lowly Palace. This year, Sandoval has raised the stakes higher than ever with a release on The Bearded Man.

The Bearded Man –often referred to as simply “TBM”– is a sublabel of Armada Music, which is the imprint of the famed Dutch DJ/producer Armin van Buuren (who has been among DJ Mag’s top five ranked DJs in the world every year since 2002). TBM has been Armada’s home for forward-thinking electropop, chill-out and house music since 2014, featuring the likes of Kungs, Lost Frequencies, Branchez & Greyson Chance along the way.

Sandoval’s debut on the label is a vocal-chop-fueled future bass anthem entitled “Help!” Though admittedly it might be slightly less lyrically personal as “Places,” the song isn’t without its tradeoffs; “Help!” rounds out as one of Sandoval’s most fun and danceable pieces to date.

Sandoval wasn’t totally alone in his efforts, however. The song was done in collaboration with two of the student’s good friends from overseas: producers Naut Blonden and Wouter Rodenburg (professionally known by their combined moniker Bloom & Bridge).

Bloom & Bridge have worked with Sandoval on numerous occasions, co-writing/producing “No Matter Where We Are” and “Small Town,” as well as the low-key hit song “Hollow” (which has over 12 million plays on YouTube).

Needless to say, the three make a pretty dynamic group.

“Wouter and I were looking for a singer for the longest time…he said Edgar was down to work with us … I was super hyped,” Blonden said.

The workflow between the trio is also impressive. Rodenburg noted Sandoval’s ability to return a “complete written and recorded vocal” within six hours of being sent a demo. Interestingly enough, however, “Help!” took around six months to fully come together – the longest they’ve spent on any of their collaborations.

All the hard work that went into making “Help!” undeniably paid off. Releasing on Armada was a huge milestone for all three musicians involved, especially since Armin van Buuren has been such a big inspiration for both Blonden and Rodenburg.

While Sandoval has worked with other well-known labels recently, he spoke especially fondly of his experience with Armada & The Bearded Man.

“Compared to other labels in the past, it was a breeze, all they needed was the song and they took care of everything else,” Sandoval said.

Sandoval also took note of TBM’s enthusiasm toward promoting and endorsing the song.

“Their excitement also fueled my excitement for the song,” Sandoval said.

Sandoval said he hopes to work with The Bearded Man again in the near future.

Listen to “Help!” on Spotify