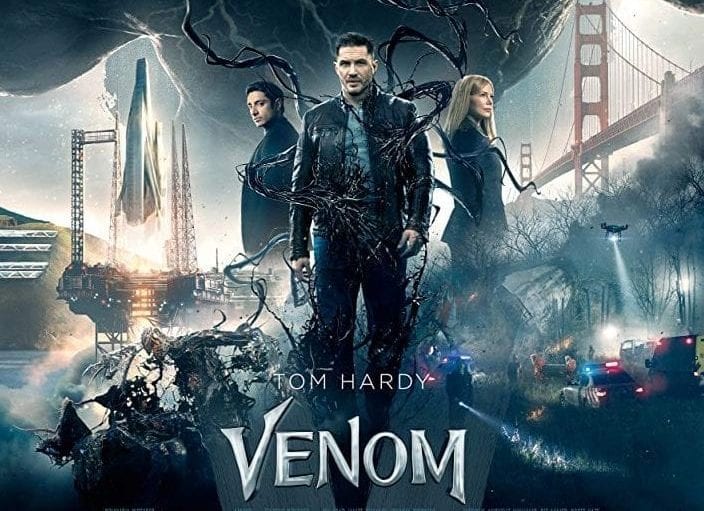 “Venom” (2018) is directed by Ruben Fleischer and stars Tom Hardy, who plays Eddie Brock, in this Sony film attempting to establish a Spider-villain franchise. Fans and critics are quite split on this film. Venom sits on an embarrassingly low 33 percent on Rotten Tomatoes; however, the audience score is at a solid 88 percent despite being almost completely panned critically. Venom made $80 million in its opening weekend, grossing $150 million in just over 2 weeks, already overtaking “Ocean’s 8”, “Skyscraper”, and “A Quite Place” at the box office. So why the huge divide?

“Venom”objectively is not a good movie; however, it is still incredibly enjoyable despite its flaws. The film suffers from structural issues, choppy editing, confusing characters, and a somewhat disappointing conclusion, but the movie is so ridiculously silly that it is quite enjoyable to watch. Tom Hardy seems to be given lots of acting freedom to do almost whatever he wants, and his performance carries most of the film. His dynamic with the alien persona of Venom was incredibly entertaining and even sincerely funny at times. For as much as my brain tells me the movie is not good, my heart tells me to let go and enjoy the silliness of it.

Despite being fairly entertaining to watch, there are plenty of elements that prevent the film from being more cohesive. Before the film was released, Tom Hardy confirmed rumors of studio interference, stating that there was about 40 minutes worth of content that were removed from the final cut. More likely than not, Sony made a last-minute decision to keep the film a PG-13 rating, so they made some last-minute changes and edits to keep the film from having too much violence. Unfortunately, it shows. This film has a surprising amount of language in it for a PG-13 film, but it also has a surprising lack of blood and gore for a film starring a character who eats people. The film seems tonally inconsistent because it could have been much darker and bloodier, which would have fit the character better and made the film more cohesive, but studio interference has harmed that coherence in the hopes of making more money.

Aside from Eddie Brock and his interactions with Venom, most of the characters in the film lack a real sense of presence or even character in general. Michelle Williams gives a largely confusing and forgettable performance as the love interest of Eddie Brock whose name nobody knows or cares about. Carlton Drake, the villain played by Riz Ahmed, lacks clear motivations or goals that carry any emotional weight. Dr. Dora Skirth, played by Jenny Slated, assists Eddie and attempts to serve as the moral compass of the film, but the audience knows little to nothing about her to make her involvement compelling, even though her performance is fairly decent. The only other characters of note are the generic goons of the Life Foundation who have little to no personality. Thankfully, the plot focuses enough on Eddie Brock to make us forgive its lack of character development.

Carlton Drake does, however, give an interesting speech towards a test subject named Isaac. He reminds Isaac of the Isaac from the story in the Bible, where Abraham is commanded to sacrifice Isaac and has such faith in God that he is willing to do exactly that. Carlton Drake presents the test subject Isaac as a similarly vital and important sacrifice for the good of the human race. That said, Carlton Drake is also taking matters into his own hands because he says that if God is real, He has abandoned earth entirely and has left them to die, since the earth will die out in the next few decades. As a Christian, I think it is important to be aware of what pop culture says about the Bible and God so that we can use that connection to have an open discussion about our faith. Let’s take every thought captive for Christ.

Without getting into spoilers, the film also ends in a rather unsatisfying way. What I found to be most surprising was that Venom explains his own weaknesses as a symbiote to Eddie. The plot would have been better served if that information was saved for the final fight. They could have developed the relationship between Venom and Eddie even more by forcing Venom to trust Eddie with vulnerable information about what hurts him. Instead, we get a fairly uninteresting final fight that has little to do with their weaknesses at all.

That said, Hardy’s crazy performance combined with interesting chemistry with Venom make for an entertaining spectacle of a film. The motorcycle chase sequence is quite well done, and the action scenes with Venom do well to show just how strong Venom can be. Despite how ridiculous the film actually is, it commits fully to its own absurdity and rarely takes itself very seriously. The film rarely questions its own weirdness and largely benefits for it.

“Venom” does include a mid-credits scene and a post-credits scene. These scenes set up a potential sequel and show exclusive footage of Sony’s next big film, “Spider-Man: Into the Spider-Verse.” Given that the box office did fairly well for a film that had questionable marketing, a sequel more likely than not is pending.

The overall verdict? “Venom” lacks enough character development or cohesion to be a truly good film, but the performance by Hardy, his chemistry with Venom’s personality, and the film’s willingness not to take itself too seriously lend the film towards a fairly entertaining experience. I recommend at least renting the film once it becomes available.

Sony’s next film, “Spider-Man: Into the Spider-Verse,” will be released later this year on December 14.