Photo of cover from Amazon.com 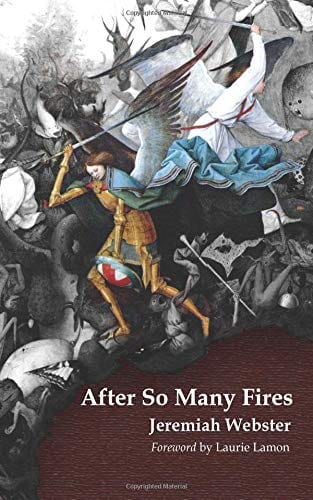 Photo of cover from Amazon.com

Dr. Jeremiah Webster’s book release gathering was an experience of delayed gratification. Northwest University students recited their original works leading up to the main event, the tribute signifying the purpose of the occasion in the first place.

Poetry and other types of literature are being cast aside in favor of tweets that fail to match the atmospheric quality of sentiment. So when the published professor came up to bat, everyone scored as the loaded bases of aspiring poets and writers benefited from a professional who knows how to hit a grand slam. With a guitar as the tool of choice, a spiritual anthem referring to Zion symbolized the home run achieved by NU’s most valuable protestant.

In his newly republished book available on Amazon, After So Many Fires, Webster addresses contemporary and timeless issues of humanity with poignant and rhetorical prowess. The book also features additional poems that are exclusively found in the republished version. In his poem “St. Francis,” Webster implies a radically alternative outlook at secular assumptions about life.

In another poem, “Natural Selection,“ Webster defends his safety against a wasp nest by destroying it. He explains this choice to destroy the wasp nest with his own history of survival against various hazards that could have been his demise since the 1970’s.

These simple examples employ an unapologetic approach to controversial ideas such as evolution. However, if you’re looking for a more direct insight into Webster’s pathos, “Hero” warns against preaching life without pain because a wounded hero must transcend the world.

Considering that literature burns the passion of a writer, one must ask Webster, why choose the poetic flame of pathos welded?

“Each respective genre offers a particular strength (and weakness) to the creative process,” Webster said.

These words about writing have never been more realistic. Journalism requires objectivity and accuracy, fiction requires conflict and character development, poetry requires depth and sentiment. These criteria are their own worst enemies by failing to fulfill the promise of coming through with delivery.

As Webster now transitions into prose, new challenges await him as he processes his creation in a trial by fire to forge something that resembles the “good, right and the beautiful.”

Charles Hughes also discusses Webster’s republished book in an article from The Christian Century, which can be found here.