Haley Hanford and Jane Cooksley as Guess Who? characters. Photos by McKenna Smith 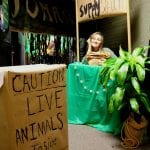 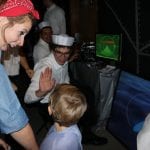 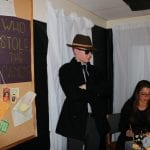 Brotherhood and Sisterhood as Clue. 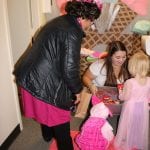 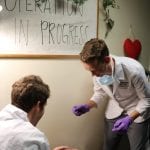 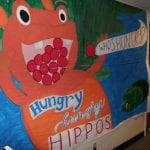 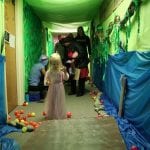 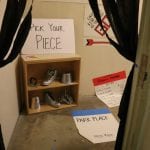 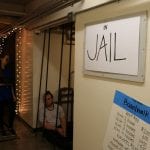 FOA’s portrayal of Jail in the game of Monopoly.

For the third year in a row, Northwest University hosted a Halls-O-Ween event in the residence halls of the Grey-Beatty and Guy-Perks-Crowder dorms. This year, the theme for the hall decorating was board games. Residence halls were transformed into interactive, life-sized versions of board games such as Operation, Monopoly, Hungry Hungry Hippos, and Candy Land.

Families from the surrounding community were invited to bring their kids for a fun and safe Halloween event.

Every year, the halls are pitted against each other in a friendly competition to design the best-decorated floor. This year there were both “Critics’ Choice” and “Kids Choice” awards, adding a new element to the competition. Children were able to cast their votes for their favorite hall once they had explored each of the board game experiences.

The Brotherhood/Sisterhood won “Critics’ Choice,” with their hall transformed into a real-life version of Clue.

The first- and second-place “Kids’ Choice” awards went to the Wolfpack and the Jungle, respectively. The Jungle transformed their hall into Jumanji, while the Wolfpack created a lifelike version of Battleship.

One mother from the community said she was thankful to have a really fun experience for her children to attend for Halloween. “I appreciate the interactiveness that this event gives to the kids, and I think I might have loved it even more than my kids did,” she said.

Haley Sarian, RA of Crowder 400, said she was shocked by how many people came out to help decorate their hall.

“There were lots of creative minds who put in a lot of work to bring everything together,” Sarian said.